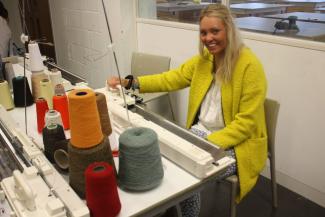 A Kingston student has won £1,000 and the opportunity to have her clothes produced and sold nationwide after coming first place in a competition held by the brand Evans.

Rebecca Louise Partington’s design made it to the top of Evans’s plus size fashion campaign, The Cut, and she explained that it felt ‘unreal’ to have her design sold online and at all the brand’s flagship stores next summer.

“It was a shock when I won and to get all the attention,” said Miss Partington, 21, who studies BA Fashion. “When we went into Evans, after they announced the winners, they told me that they wanted to produce seven of my designs. I can’t believe that I have seven garments coming out!”

Miss Partington explained that the competition went out to BA Fashion students at Kingston and Bournemouth University (print and knitwear specialists) and that she had not expected to win, being a second year student competing against third years. She said: “Nearly everyone that does knitwear did it, so it was quite a big deal.”

Elinor Renfrew, course director for BA Fashion, said that knitwear was something that they focused on at Kingston, and that Miss Partington had done particularly well. She said: “Our knitwear is very, very strong. It is important to have students that are industry ready, prepared and their portfolios look professional.  A photographer was telling me that Kingston student’s work does not look like student work but designer collections, and that is a compliment.”

Miss Partington explained that she was ‘a very colourful designer’ and that her theme for the project had been ‘the girl who travelled the city by a balloon’. She said: “I found a picture of NY with loads of balloons in the air, which really inspired me. Something simple, but it works.

“Our knitwear is very, very strong”

“The whole brief was totally open to do whatever you wanted to do. They didn’t restrict it because they wanted to come up with something new, without focusing too much on the Evans side.”

Miss Partington said she would recommend studying BA Fashion at Kingston – a course that was ranked the fourth best in the world by Fashionista.com this year – but that it was hard work. “Fashion has got to be your life and you have to love it and really, really want to do it. I am definitely proud of having gone to Kingston and it is a good thing to have on your CV.”