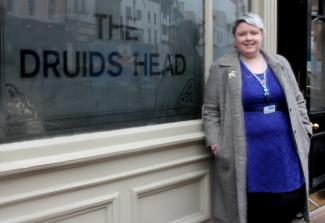 We all know the feeling of waking up in the morning with a terrible hangover that is impossible to get rid of all day. But did you ever think that by stopping drinking alcohol for one month you could raise money for cancer care?

KU student Sara Hope accepted the challenge and decided to go sober for the month of October. Her goal is to raise as much money as possible to support cancer patients and to give her liver a break for 31 days.

Go Sober for October is an initiative by Macmillan Cancer Support to help people affected by every type of cancer to get support through treatment. The funds raised by participants go directly to the charity and will reflect on the lives of millions of patients and families fighting cancer.

Sara Hope, 20, an English Literature student at Kingston University, decided to go sober this month after the loss of two relatives to cancer in a period of 18 months. Sara’s grandad started to raise money for Macmillan a long time ago and Ms Hope decided that it was her time to do it.

“My great aunt died last March and it was so quick that within a week she felt a bit ill, she went to the hospital and they found a shadow on her liver. Within two days we found it was cancer, and within a week she died. If my aunt was diagnosed quicker she might have survived,” Ms Hope said.

Macmillan supported Ms Hope’s aunt financially and emotionally throughout the fight against cancer. She did not have children so the charity became her family and provided staff to make it easier before her death.

Ms Hope – like most university students – enjoys a drink and says that it will be hard to see friends drinking around her and not being able to drink with them. However, she is happy about saving money.

“A lot of my friends said they will miss my Facebook drunken posts, which is a bit nice,” Ms Hope joked.

According to Ms Hope, universities need to support more causes like Go Sober for October because everyone, at some point in their lives, will have their lives affected by cancer.

“I think Go Sober For October is almost the perfect thing for students to do because lots of students have been known for drinking a lot. It is a perfect student challenge because it is something you do most days that you can easily not do and raise money,” Ms Hope said.