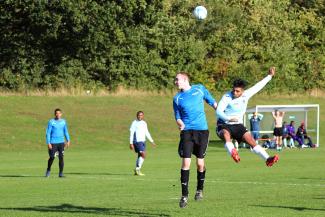 Kingston thirds went to the top of the table and maintained a 100 per cent record with a comfortable 3-0 victory over local rivals Roehampton seconds.

The home side dominated proceedings, with Roehampton rarely looking clinical enough to breach the Kingston defence.

The opening goal came as a result of mounting pressure, with Ben Acheampong heading in from an outswinging corner on the 30 minute mark.

Kingston should have gone into half time leading by more, but Acheampong failed to hit the target after some good work on the left wing.

After a scrappy start to the second half, Taj Huda was rewarded for some good pressure when he managed to capitalise on a goalkeeping error and tap into an empty net.

Kingston captain Josh Everest said: “I think we killed the game off with the second goal, and the third was the icing on the cake.”

With the score at 2-0, Roehampton captain, Omar Mahmoud, had a fantastic opportunity to pull a goal back, but forced himself too wide after skipping round Kingston goalkeeper, Josh Everest, and dragged his shot wide.

With the last kick of the game substitute Oliver Freke finished neatly after being played in behind the Roehampton defence for Kingston’s third goal. Everest said: “I’m really pleased with the result and performance. We scored good goals, and definitely deserved to win the match.”

Roehampton captain Omar Mahmoud said: “It was difficult today for us. Kingston played well, but we let our heads drop after the first goal and just couldn’t recover. They deserved to win. We need to improve and bounce back in our next league game against King’s medics.”