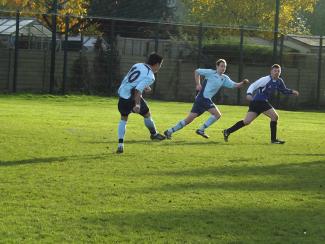 Kingston firsts surrendered a half-time lead and crashed to their first defeat of the season, losing 2-1 away at bottom-of-the-table St Mary’s on Wednesday afternoon.

Tang Van Ngujen had given the Cougars the lead on 15 minutes when he poked home from close range, but a mixture of missed chances and sloppy defending cost Kingston the win. St Mary’s hit back with two second half goals.

Kingston started the game brightly looking to cement their place at the top of the table, with Van Ngujen thwarted by some stalwart defending after five minutes.

Kingston were rewarded for their early dominance on 15 minutes when Van Ngujen made no mistake with his second opportunity of the game.

Charlie Marshall played a perfectly weighted through ball to Knut Vold who tapped it under the onrushing keeper leaving Van Ngujen to slot into an empty net.

Kingston continued to apply the pressure with Lyle Collins and Marshall dominating in midfield, but goalkeeper Kieran Sanderson still had to be on his toes after 35 minutes bravely to save from the feet of an advancing St Mary’s striker.

The Cougars had two good chances to double their lead before the break, with St Mary's keeper first saving well from Keli Nutsugah before a curling effort by Kaveh Rashti clipped the woodwork.

The second half started in a frantic manner, and it was the home team who grabbed the second goal. Marshall was adjudged to have committed a foul on the touchline, and from the resultant free kick Joe Grover was allowed to drift in and flick a header past the exposed Sanderson.

From there, the previously lacklustre St Mary's took control of the game, and struck a deserved winner after 66 minutes to secure an excellent second half comeback.

A misplaced pass from Kingston centre back Robbie Flynn allowed St Mary's striker George Bennett to crash an unstoppable effort from the edge of the box past Sanderson and into the corner of the Kingston net.

After the goal, Kingston’s hopes began to fade with the dying light, with Rashti having the Cougars best chance to draw level on 80 minutes but he could only fire over with the home keeper out of position.

The home side continued to frustrate the visitors as they failed to carve out any more goal scoring chances, condemning Kingston to a disappointing first defeat of this campaign.

Kingston captain Connor Billington said: "We  had more than enough chances to win that game, but our finishing really let us down. Although it hasn't been a bad start to the season that is three points dropped against a team we really should have beaten.

"We will have to work hard on finishing in training on Monday and come back with a bang next week."

Kingston’s next game is at home against Brunel thirds on Wednesday November 20.