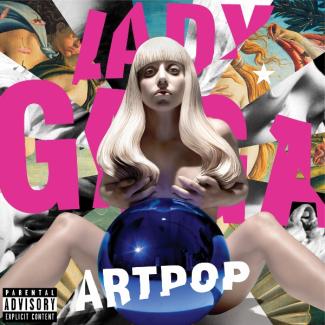 Two-and-a-half years since her last record, Lady Gaga is back with a bang.

Having shot to the top so early in her career, the public have high expectations and each of her previous albums proved something different. The Fame was about the music, The Fame Monster about the visuals and Born This Way about the meaning. So where does ARTPOP fit in?

Well, ARTPOP is more experimental than the others. RnB is attempted on the second single from the album, Do What U Want (a collaboration with R. Kelly), and is the standout track from the record. She gives a hip-hop flavour with Jewels N’Drugs (with help from T.I., Too $hort and Twista), but it’s not the best and leaves you thinking maybe Rihanna should stick to the pop/hip-hop productions.

However, dance music is pushed to maximum with G.U.Y., Swine, Donatella, Mary Jane Holland and Applause. Traditional Gaga-esque songs Aura and Venus open the album and leave you in no doubt of whose record you are listening to.

In an album wrapped in a dance music mask, Dope, the only ballad, stands out alongside the well-produced Gypsy, an emotional nod to her jet-setting lifestyle – “I don’t wanna be alone forever, but I love a Gypsy life”.

For the “enigma pop star” that is Lady Gaga, ARTPOP will stand strongly alongside her previous work. Not sure whether the cover is a masterpiece or a mess, this record is not earthshattering, but it gives a gentle reminder to the likes of Katy Perry and Miley Cyrus, of who remains at the top of the pop music tree.

This is an album that no other pop artist (past or present) could pull off. The first line of the album, “I killed my former”, shows this girl is not only back with a bang, she is ready to fight her way to the top once more.

ARTPOP is out now