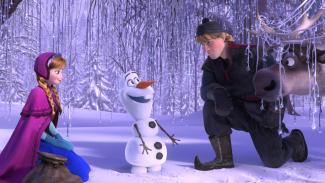 Disney's latest animated adventure Frozen is quite literally its coolest comedy to date.
Loosely based on The Snow Queen by Hans Christian Andersen, it tells the story of the optimistic and energetic Princess Anna (Kristen Bell, Gossip Girl) and her more reserved sister, Princess Elsa (Idina Menzel, Wicked).
Elsa, who has the ability to turn things into ice and snow, isolates herself from her sister after an unfortunate childhood incident in which she accidently hurts Anna when she panics during a game.
The sister’s parents then lock down the castle so that Elsa can attempt to learn how to suppress and control her growing powers.
Years later, following their parent’s death in a shipwreck, Elsa finds herself thrust into the spotlight as she becomes Queen.
Frosty outburst
Anna, who has dreamt of the day the castle doors will re-open, is understandably eager to not only see her sister for the first time in many years but to meet the people of the city. It is not long before she meets and falls in love with the dashing Prince Hans (Santino Fontana, The Importance of Being Earnest) from the Southern Isles.
However, her declaration of love for Hans prompts a frosty outburst from Elsa whose secret power is then revealed. When the frightened citizens of the town call her a monster she flees the Norwegian-inspired kingdom of Arendelle, accidently leaving it in an eternal winter.

Anna sets out to find her sister and bring her home to thaw the snow. Along the way she meets ice guy Kristoff (Jonathan Groff, Glee) and his loyal reindeer sidekick Sven who live in the mountains Elsa has run to.
The trio soon realise that they could be on thin ice searching for Elsa in snowmaggedon-like conditions as they encounter wolves, a giant snow monster and magical trolls.
They also meet the loveable but goofy talking snowman named Olaf (Josh Gad from The Book of Mormon), who likes warm hugs and dreams of experiencing summer. He offers a nice bit of light relief at all the right moments.
Brilliant story
From the creators of Tangled and Wreck-It Ralph the story is brrr-illiantly told, with the help of some fantastic, catchy songs – from the prologue’s emotional Do You Want To Build A Snowman? to big power ballad Let It Go and the comical In Summer. The songs, by Tony Award-winner Robert Lopez and Kristen Anderson-Lopez, sit perfectly alongside the impressive animation of the film which is not to be missed in 3D on the big screen.
The pacing of the film is also good, with the time between each song and injection of dialogue just right. Screenwriter Jennifer Lee has created a funny yet poignant script that keeps you guessing what will happen next right until the very end.
The movie’s stance on romance sets it apart from most of its Disney predecessors as it puts the emphasis on sisterhood and the Princesses finding their own ways in life, rather than the more stereotypical stance of Prince Charming saving his damsel-in-distress.
Frozen is full of surprises and the sister’s independence and feistiness makes for a refreshing addition to the Disney family. It is a film that should thaw any Scrooge’s heart this Christmas.
Frozen will be released in cinemas December 6.