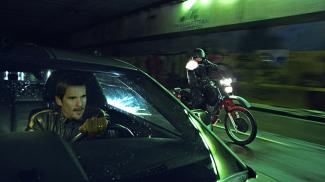 The story of a man trying to find out who kidnapped his loved one, and a villain wanting to play silly games with a hero whose good luck beats that of the Irish, is the basic outline of Getaway’s plot. Sound familiar?

If you haven’t already figured it out, Getaway has taken what we love about brilliant action films and driven it straight to the ground – surprisingly without the help of Nicolas Cage.

He gets a phone call from the villain in the film, known only as The Voice (Jon Voight), telling him he has his wife and that if Magna doesn’t do as he’s told, she will die.

Despite his name being on the poster however, don’t expect to see Voight for more than a few seconds – nothing more than his chin that is. He literally is just a voice.

And there are few things that have made me cringe more than hearing Jon Voight’s thick, fake Russian accent say “Tick Tock” during one of the million car chases.

Disney-alumni Selena Gomez is also in this film for some reason, playing a teenage hacker that accidentally falls into Magna’s front seat, and is forced to participate and show her hacking skills through her iPad. 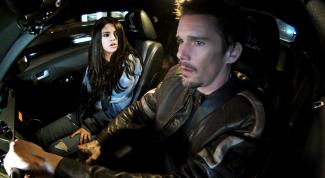 Not only does Getaway seem like an ad for iPads, GoPro cameras and Shelby Mustangs, it seems like the only thing the director’s managed to master, ironically, is to make an action film tedious.

Not only does the film’s cast all seem unengaged in their performance, but the dialogue is so empty it makes Shia LaBeouf mumbling “No” a million times in Transformers seem like brilliant screenwriting.

Unlike other car films, “director” (not sure there was one) Courtney Solomon has also failed to include what most of these films have: memorable characters.

The acting in Getaway is dreadful, even from Hawke, and Gomez’s role makes you wonder if the myth that Disney stars can only do Disney might be true.

With scenes that only last a matter of seconds before changing angles, the already anonymous characters all seem disconnected with the story, making it really hard to care about any of them.

Unlike other car films such as  The Fast and the Furious and Rush, the car isn’t a part of the main character, but a character of itself. In fact, the car is the best character in the entire film.

A series of beautiful flashbacks to when Magna’s wife was kidnapped is the only thing that makes this film deserve half a star. 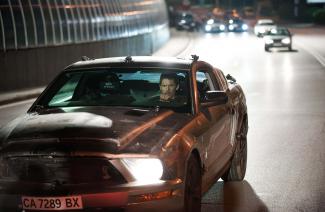 What’s sad is that these scenes don’t really make any sense, which brings us to Getaway’s possibly most irritating problem – the development of the plot.

I have nothing against being thrown straight into the plot of a film, but throwing you into the plot and never really going back in time to explain things properly never works.

Instead of explaining the background of the story in a natural way, we get to hear about Magna’s past through awkward conversations between the characters during the 90-minute car chase extravaganza.

One, you can drive a Shelby Mustang at top speeds for hours on end without having to fill up on petrol.

Two, if you’re Ethan Hawke driving a Shelby Mustang, the car chase will not include the police doing anything else to stop you other than drive after you.

And three, After Earth is no longer the worst film of the year.

Getaway will be released in cinemas December 6.