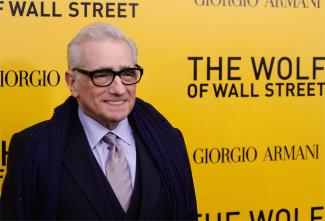 If Goodfellas, Casino and Raging Bull were rockstars and legendary musicians, then The Wolf of Wall Street is their tribute band.

The basic formula goes as follows: Wolf of Wall Street is a pin board stuffed end-to-end with Martin Scorsese’s greatest hits and tricks with the drug factor cranked up a few thousand notches and the risk factor turned down to a distant whisper.

We follow Jordan Belfort (Leonardo DiCaprio), a former stockbroker, as he dodges, stumbles and weaves in a drug induced stupor, around the perpetually grey area known as the stock market.

The Wolf of Wall Street is a look at everything Wall Street with as little to do with anything technical as possible.

We are introduced to Belfort on a chaotic day at his brokerage firm amidst stock selling and dwarf-throwing.

The movie is an adaptation of the real-life story of Belfort’s rise and pitiful fall from his life as a successful, but fraudulent stockbroker.

While DiCaprio’s role as Belfort was one that strayed from the mysterious, restrained and quiet archetype that he’s used to playing in his previous endeavours with Scorsese (Billy Costigan in the Departed and Amsterdam Vallon in Gangs of New York), the true star of this movie is Jonah Hill’s rendition of Donnie Azoff. Belfort’s slimy, pill-popping sidekick.

In a world where the moral compass is spinning so fast, you were convinced it did a line of cocaine, Hill paints a sickening picture of a man rapidly losing himself and takes the audience on a journey where they will grow to love, hate and ultimately pity the lonely wreck he becomes.

One thing has to be understood about the Wolf of Wall Street. This movie is not for the people inspired by Belfort’s story or the fans of DiCaprio or Hill for that matter.

This movie is for the fans of Scorsese. It is for every fan that has waited since Goodfellas to see that tracking shot, since Mean Streets for that slow motion and since Casino to hear that running narrative.

For everyone that has waited since the 90s to see that 4th wall breaking, long shot tracking, freeze framing genius that is Scorsese.

While the trip down directorial memory lane is one that will be cherished after retiring these techniques for so long, the movie won’t leave you stunned.

It is undoubtedly a movie that is a cut above several of his others but a fair few rungs beneath any that attained him the status of a legend.

To summarise what the movie screams throughout: “Money can’t buy happiness but I’d rather cry in my Ferrari.”

You might think different day, same story but the way Scorsese depicts it, you’ll want to see it anyway.