Based on a minimum of a 10-car fleet, Lease Fetcher has identified that KU is the top university in the UK with nine of its 14 (64.3%) vehicles being electric.

“This would primarily be staff usage although some universities might have vehicles for students to borrow for sports and societies I imagine,” Lease Fetcher’s spokesperson Sidse Sorensen said. 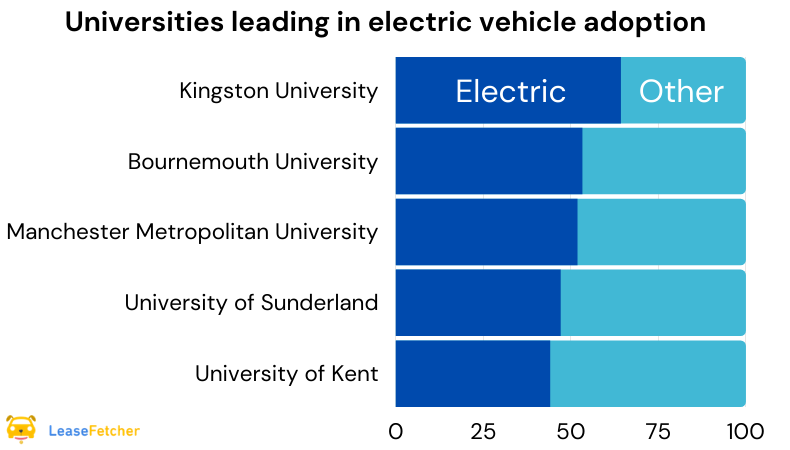 Lease Fetcher’s founder Will Craig said: “Although diesel is still the reigning fuel-type champion across UK university fleets making up 69.9%, our research shows that the popularity is in decline.”

A vehicle for students

Kingston University’s School of Engineering lecturer Patrick Sheen said that sustainability is key in the survival of the human race and our planet’s health is the main reason more electric vehicles are being used every year.

“The internal combustion engine has been around for over a hundred years and we are reaching the limits of the efficiency these things can produce.

“As much as an engine sounds amazing to a lot of car enthusiasts, it’s a technology that has existed for so long now and it’s just got to its endpoint and for us to progress and sustain, it has to die in a way,” Sheen said.

Academic Lead for KU’s Formula Student team suggests that the UK government’s plan to stop selling new petrol and diesel cars from 2030 will speed up the transition to electric vehicles and praised KU’s approach of an early change.

“The earlier you do it, the better.

“KU has a very strong incentive to become energy-wise sustainable in the future. The engineering campus sits in a part of London that will very soon be in a very low-emission zone and I think it’s a fantastic thing.

“When you’re in the heart of London, there is so much travel going on, so it makes a lot of sense,” Sheen said.

Sheen revealed to The River that KU is in a process of buying another electric vehicle. The Department of Mechanical Engineering is purchasing a Volkswagen ID.3.

“That is a purely electric, brand new design, it is about as modern as the technology can get.

“We have been in the running to buy the new car in the last year or so. The car that we’re using to teach for vehicle production is a diesel Renault Megane.

“The technology teaching students about diesel engines is important for general understanding, but it’s no longer going to be relevant when these guys graduate, because car companies if they are developing a new diesel car, it’s going to be an adaptation from the previous one.

“We want our students to be future-proof engineers and when we got the money for the car, we went straight for as modern as we can get,” Sheen said.

Sheen said his students are going to use the Volkswagen ID.3 as a design tool but will have to take precautions before exploring the electric side of it.

“Taken the fact that it’s electric aside, it is ultimately the latest technology. We can take students into the lab and talk about the car’s design, aerodynamics or packaging.

“However, when it comes to the electric side of it, this is something we have to be very careful with. Electric vehicles are statistically more dangerous than internal combustion engine cars. The voltage is running through them can be up to two or three times the voltages you get from an every-day house socket.

“We will be integrating [the electrical part] down the line, but is important first that we get everyone up to the safety measures,” Sheen said.