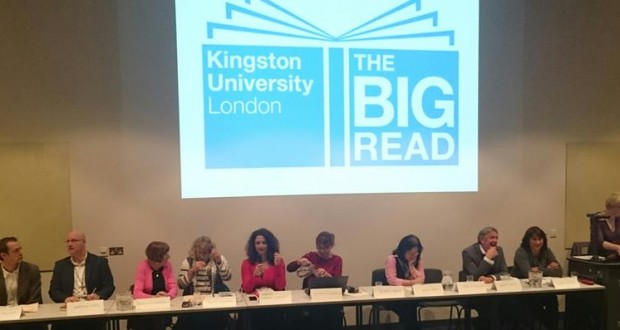 Written by Ingrid Ciakudia on November 3 2015

Colleagues across the university discussed how the themes in the KU Big read book, About a Boy, could relate to their teaching, research, administration and their personal lives at the Penrhyn Road Clattern Lecture Theatre.

On Thursday October 29 a number of themes were brought up during the ‘Balloon Debate’ such as mental health, suicide, making relations and children in care. The critique the university had recieved for not choosing a book that could relate to the students of ethnic minorities was also mentioned. Dr Alison Baverstock, senior lecturer in publishing, informed the audience of the outcome of the project and later introduced the panel which consisted of nine people.

“There were actually more staff interested in the Big Read than we had anticipated so we had to print more copies. 60 per cent of those who had the book read the whole thing, which was a bigger amount than we had expected,” she said.

Baverstock explained to the panel and audience how the university decided which book would be the first Big Read. She gave credit to the Vice Chancellor, but also the students and herself.

Baverstock said: “The KU Big read scheme started as a research project by students and academics working together and because the student had done such a great job and the vice-chancellor was really keen we wanted to put the project in to place immediately. Everything happened a bit fast so we didn’t have time to do a wide consultation of the book, so it was the Vice-chancellor who made the decision.”

The course director for creative writing, Dr James Miller commented on the critique of a lack of ethnic minority representation in the Big Read book.

“I am surprised that people want a book to reflect to their personal lives and reflect to their experiences, to me that is a bit boring. I would recommend that everyone reads as wide and deeply as possible. Black authors, white authors, American and European because every great book can expand our conciseness and deepen our engagement to the world,” he said.

Tessa Goddard a Business support assistant at the university said that her job as a ‘floating receptionist’, meaning that she is at every campus that needs her, could relate to the story of the relationship between the main characters in the book (Marcus and Will).

“As receptionists we need to make connections and deal with students who may feel vulnerable and lonely. Some students have to adapt to a new place if they are moving from home. I am around all campuses and can make connections across the university. Receptionist create that first impression,” she said.

She continued to explain that Marcus is a very vulnerable and lonely boy and has had to adapt to new changes. Then he meets Will and develops a relationship with him.

“Towards the end Marcus starts to feel safe as he has other people in his life that he can rely on. I believe that their story can relate to our job as receptionists. Above it is connecting to the students and giving them a safe place at the university,” she said.

According to Alison Baverstock there has been very positive feedback from students who had been involved in the scheme.

“New students said that they felt encouraged, accepted and welcomed, it was quite moving to me,” she said.

This debate was the last event of the year, which would connect to the KU Big Read. There have been several opportunities for students to discuss the book with the KU Big read team and an event where they could talk to the author, Nick Corby.

The University Chancellor, Bonnie Greer said: “I have never heard of anything like it, novelists and scholars coming together like we are today. It is very important in the 21st century to find a book that we can share together as a university.”

The next book is being discussed.