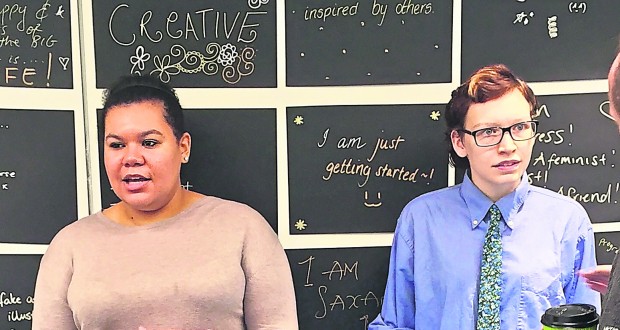 The Civics Team are a student group working across Kingston University to raise awareness about civic responsibility among students.

They ran an identity project at Penrhyn Road on October 22 2015 from 11-2pm and the day before at Kingston Hill from 12-3pm.

Amy said: “It’s about getting students more involved with the world around them by talking about race, religion, gender and the environment.”

The identity campaign asked the question “Who are you?” to show how students might describe themselves in a way that is different to how others label them. After they wrote down their answer starting with “I am…” they then had their picture taken.

Amy said: “Kingston is such a wonderfully diverse university that we want people to be able to see all different kinds of students that go here.”

On December 9, they are arranging a debate concerning the issue of the Conservative party wanting to scrap the 1998 Human Rights Act. Conservative MP James Berry and Amnesty International will appear on the panel.

They are also trying to get lecturer Stephen Bowen to appear, who has worked as a Chief Human Rights Officer during the UN Mission to Bosnia and Herzegovina (1995-2000) and as a Campaigns Director with Amnesty International UK (2000-2005).  He currently works as a Director at British Institute of Human Rights (2010-Present).

Jaime said: “We are going to have a law lecturer to give factual law information because we could not find anyone else who is against the Human Rights Act.” Amy added: “Says quite a lot I think.”

The photo voice campaigns are ran fortnightly and at the end the team will put on an exhibition. There will be three people who will have their photos on display. One person will win a prize that includes money and vouchers. Jamie said: “It will be a nice end of year thing, we will try and organise something for that as well.”

“Around the first week of March, there will be end of the year civic activities and we will be targeting high level speakers to come in and speak on civic issues and probably try and get something with the police and discussion about race within the Metropolitan Police,” said Jamie.