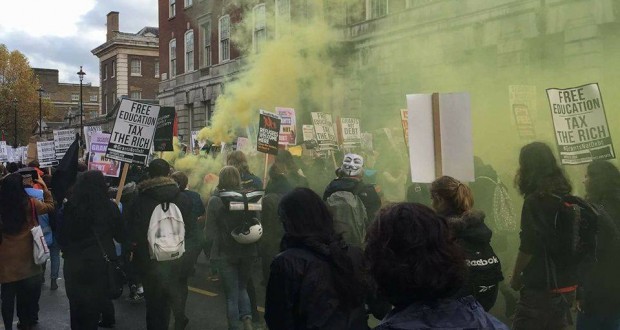 Students clash with police as they demand free education

Written by Claire Gilbody-Dickerson on November 5 2015

Dozens of people were arrested at a student rally yesterday in Central London, where thousands protested against increased tuition fees and called for free education.

The demonstration set off peacefully at 1:30pm, though violence erupted as the rally passed by government buildings, and it flared as it reached the Department for Business, Innovation and Skills (BIS) at around 4pm.

The rally, organised by the National Campaign Against Fees and Cuts, assembled outside University of London and carried on towards Downing Street, Parliament and the BIS.

Some protesters dressed in black and covered in scarfs threw flares and broke into a police barrier.

Scotland Yard said in a statement that a “small group of protesters” had thrown paint outside the Home Office, while “another group attempted to push their way into the Department for Business, Innovation and Skills building but were prevented by police”.

Scotland Yard added that a number of smoke bombs and eggs were thrown at police outside BIS and that officers made arrests for public order offences.

The organisers of the rally said that their defiance towards the government triggered after the announcement in the 2015 General Election, that tuition fees could rise under the current government, with George Osborne later announcing that maintenance grants would be replaced with loans in 2016-2017.

Caleb Steer, 19, from Birmingham and studying fine art, said: “Converting maintenance grants to loans will have a really bad impact on people who haven’t got the access to different opportunities.” 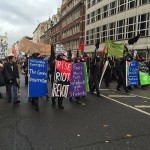 Students carried banners in protest against increase in tution fees 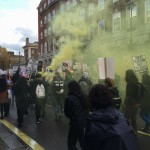 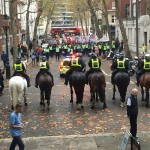 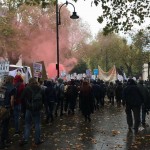 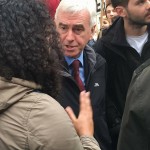 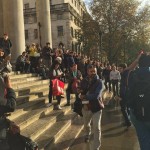 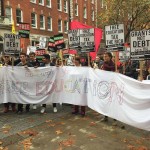 Students carried banners while calling for scrapping of student debt 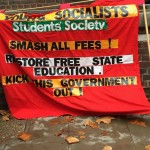 Thousands gathered to call for return of grants 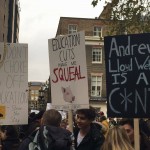 Mr McDonnell said: “Your generation has been betrayed by this Government in increases to tuition fees, in scrapping the education maintenance allowance and cuts in education.

“This Government is betraying you and future generations. You need to oppose it and I’m here in solidarity with that opposition.”

He said education was a “basic human right that must be protected”.

NUS Vice President of Further Education Shakira Martin, 27, called for free education as it gave “people from all walks of life the opportunity to reach their potential”.

An estimated 10,000 students and activists attended the protest, as well as Bunny Easton, 85, a retired insurance clerk, who said free education is “realistic if we get our priorities right”.

Mr Easton said: “If we were to charge the drink industry on alcohol fuelled injuries to cut NHS spending, then our priorities are correct and we can get free education.”

The protesters also stood in support of scrapping the Trident nuclear system and the welcoming of refugees into the UK.

With reporting by Eric Brain