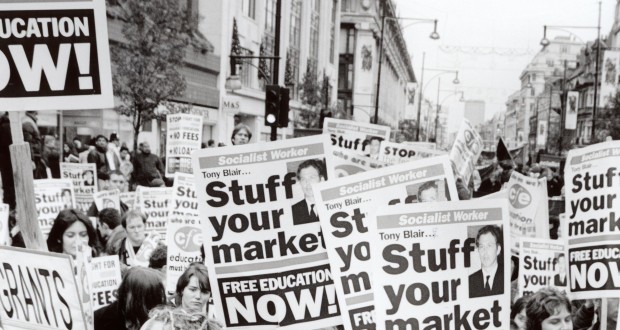 Are students too lazy to protest?

Written by Julia Canas-Martinez on November 28 2015

Over the past few weeks, students have been taking to the streets to do what students supposedly do best – protest.

From large-scale protests like the Million Mask March which took place on Guy Fawkes Night and got a bit rowdy (only a few abandoned cop cars burned this year!) to nationwide walk outs organised by the NUS in support of immigration and international students.

But what was apparent at Kingston was a general disinterest in the whole matter. In total, maybe 30 people took part in the 15 minute protest outside the Penrhyn Road campus during the NUS walk out. It has to be said though that the few who did attend were passionate, with only a marginal levels of sheepishness.

Before you brand me a hypocrite, let me tell you that I am addressing this as much to myself as to almost everyone else.

Despite being loud and opinionated and angry, I also did not attend any of these protests, but I could not tell you why. I agreed with the message, I agreed with the action being taken, and I still did not go.  But of the 24,000 students that attend this university, 23,000 and something did not go either.

Somehow most of us are disconnected from big political movements. We have watched every single great movement rise and crash in the most hopeless way imaginable. A few things have looked promising, like Occupy, but before we could even think of taking part, we got to see it corrupted. Sometimes it ended up feeling unidentifiably suburban and middle class. Other times it was a bizarre and bewildering attempt to repeat the 1967 protest against the Vietnam War, where anti-war activists (and I use this term quite loosely- many have since admitted they were not interested in the politics, but in weed and in pissing their parents off) attempted to levitate the Pentagon.

The problem is we often cannot relate to the movements we are expected to be involved with, but that should not stop us from acting. This isn’t to say there aren’t some very valid reasons to not take part in activism. People have jobs and families to support, or can face very serious consequences when they return to their home countries. But there is no way all 24,000 of us have this excuse. So other what excuses do we have for not getting involved?

What we all need to do is start fighting against the very tempting, and very lazy, ‘I don’t care’ state of mind. Desmond Tutu said that if you remain neutral in a situation of injustice you take the side of the oppressor. So let’s start actually caring all the time. Start educating ourselves properly. And start speaking up because too many people are quiet and too many of the wrong people are too loud.