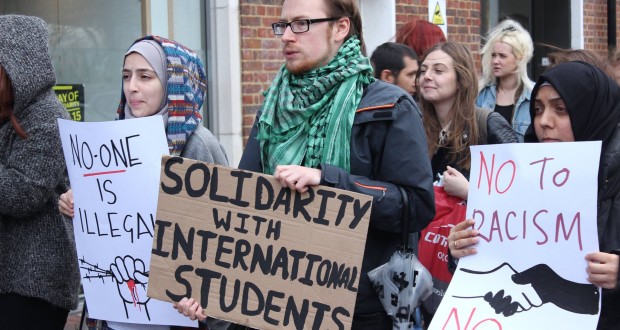 Students walk out against ‘trash’ government

Around 100 Kingston University students walked out of their classes to show dissatisfaction with anti-immigrant policies and to support international students in the UK.

The walk out, organised by the National Union of Students (NUS), took place on the International Students’ Campaign Day of Solidarity on November 17 and aimed to question the difficulties faced by international students and immigrants in the UK.

A final year engineering student at Kingston University, Ahmad Al, 21, was one of the students who walked out. Al, originally from Palestine, said: “This Government we have is a piece of trash. The British Empire colonised a third of the world and caused havoc. They need to have a bit of decency and let people in.

“Immigration is an ongoing issue in this world that needs to be tackled. Immigration diversifies a country and brings more good than bad in terms of culture, politics and innovation.”

The Union said in a statement: “We stand in solidarity with the international students and we condemn the recent visa reforms introduced by the Home Office.

“The Union of Kingston Students also extends its solidarity to immigrants, migrants, and refugees.”

The length of further education visas (FE visas) was reduced from three years to two, and students from outside the European Union now have to prove that they are demonstrably progressing in their studies before extending their FE visas.

The Government policy is to change Britain’s benefits system so that it will not be abused by immigrants. However, the current restrictions are fairly demanding on genuine students.

A third year law student at Kingston University, Paola Yermire Guzman, 21, attended the walk out because she does not agree with the way international students are treated in the UK.

Guzman, originally from the US, said: “I am a hard worker and I don’t live off benefits, as is often portrayed in the media about immigrants. I genuinely want to integrate and become a productive member of the English society.

“When it comes to the actual government policies, we are treated like criminals. And this, coupled with the ideas and perceptions brought on by the extreme right wing government, makes me feel quite frustrated.”