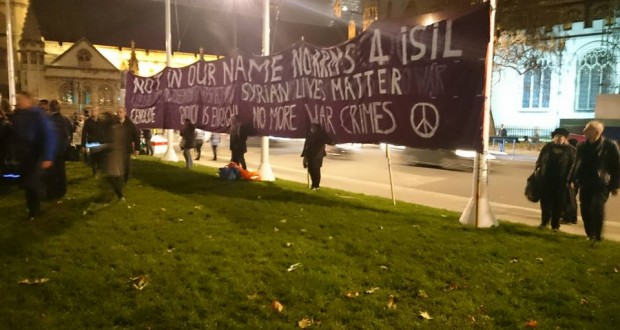 Written by Ingrid Ciakudia on December 7 2015

Thousands of anti war protesters gathered outside the Parliament on Wednesday in an effort to stop MPs vote for Syrian Air strikes just hours before the decision.

Protesters said that they were there to raise their voice so that the MPs could hear them through the walls.

“I am here today because I believe that bombing Syria is a horrible idea and that it will not be good for the Syrian people. More civilians are going to be killed and the population will be alienated,” said Fraizer Amos, 19 from the University College London (UCL)

A number of speakers shared their views on the situation and pointed out especially Prime Minister David Cameron who on Tuesday said that Jeremy Corbyn and people saying no to the air strikes are terrorist sympathisers.

An upset speaker called Shawn said that Cameron’s comment was a disgrace and brought the crowds attention to the education funding cuts.

He said: “ For education they cannot find money, but when it comes to killing people there is money, more money and more money. This is a disgrace. Their choice is for killing. The real terrorists are the people who are voting for bombing. When you cut the benefits of ordinary working people and you know it is going to lead to bombing from 30 000 feet and bomb innocent people, that’s called terrorism.”

Goldsmiths, University of London student and a member of the Labour society, Harry O’Neill, 18 said: “I think that the UK government is tackling this situation heavy handed, they are just trigger-happy and they don’t seem to care about the people in Syria. I think that they just care about making themselves look good. Military action will not help because it will not affect ISIS in any way, it will just anger them.” 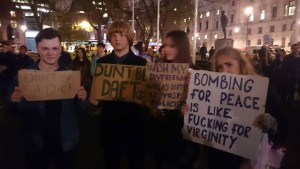 Harry O’Neill with his co-protesters

O’Neill believes that it is important that the younger generation at the protest show people that not everyone is for bombing Syria.

He said: “Hopefully this protest will sway the minds of the few people that are still wondering what to vote. To bomb Syria is a huge risk for our country because it can impact something similar to the Paris attacks, but for me it is less about our country and more about the people in Syria and the rest of the middle-east who are actually affected by ISIS.”

A range of speakers urged people to stand against the government’s extension.

O’Neill said: “The speakers here are accurate and provocative because they are highlighting not just the consequence of bombing Syria but also how this government is rather than actually helping are supplying countries such as Saudi Arabia with arms which they then use to finance and supply ISIS. So it is great that they are highlighting our actual role in the issue.”

The on-going refugee crisis has led to 12 million Syrians fleeing their homes. Fraizer Amos and fellow student Gabi Watkins, 19 believe that the air strikes will only increase the situation. 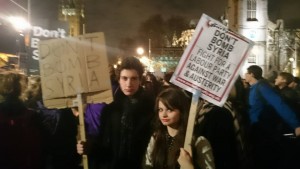 Fraizer Amos and Gabi Watson at the protest in Parliament Square

They said: “We have a refugee campaign at the university so we are sure that this will just lead to an even bigger crisis.”

O’Neill said: “What Syria needs are ground troops not western, but regional ground troops. Bombing Syria is not going to achieve anything strategically in terms of winning people back from the Islamic state. I think that diplomatic solutions should be taken in to consideration. We need to bring the Assad regime a deal where he will resign and there can be some kind of democratic government there. That’s where the focus of the UK government should be, not trying to get people voting for more bombing in the Middle East.”

The protest was filled with people holding banners and posters sharing their thoughts and showing their support to Syria and chanting, “Don’t bomb Syria-no more wars” and “David Cameron shame on you”. There was also a laying down demonstration symbolising dead bodies in Syria. 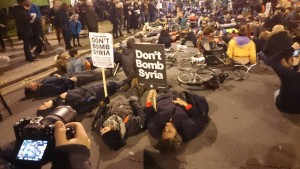 Watkins said: “I think that there has been an impact by having this protest, we have been in the media, but people have voted yes to Syria. I still think that protests like these have definitely convinced some politicians like Corbyn to stand in favour.”

There have been several protests in London organised by Stop the War coalition promoted on their Facebook page and website.

Parliament has now voted yes to bombing of Syria.