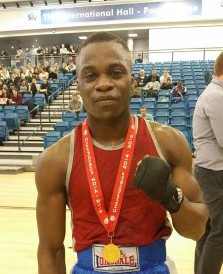 KU boxing champion and gold medallist Emmanuel Babasanya, also known as, “Mini Mike” is planning to defend his title next year with the support of his coaches.

The second year pharmacy student has begun preparing to defend the title he won in February – his second gold medal in two years of competing at the universities’ national level.

He picked up his nickname from former heavyweight world champion Mike Tyson because of his powerful punch – and the fact that he is onlty 5ft 3ins tall.

Coach Raheel Butt said: “He’s very small in stature but he makes up for it with his fitness and he can really pack a punch hence the reason why he has the nickname mini-Mike, taken after Mike Tyson. If he prepares well I don’t see him achieving anything short of a gold medal. ”

Babasanya, who knocked out Andrew Moore from Portsmouth University in the third round of the final in the BUCS Championships, began boxing five years ago in a Birmingham gym.

He was born in England but then went to Nigeria when he was only three years old.

Babasanya, 22, said: “We have to get our weight correct because you are required to fit a certain weight category so I’m preparing my meals.

“I’m in the gym three to four days a week. I want to start doing my sprints but I’m pacing myself because I don’t want to start it too early but my preparations are going well.”

His strict Nigerian parents brought him back to England to improve his education and did not want him boxing at university level.

Babasanya said: “My parents didn’t want me doing boxing because of the intensity of my course.

“They wanted me to study hard and do well but I needed an outlet, something to keep me occupied when I wasn’t studying and boxing was something I enjoyed doing.”

Babasanya puts his success down to his coaches, Tahir Hassan and Raheel Butt.

“My parents tried to persuade me not to do it but I made the decision to box. Also Raheel and Tahir are great trainers because when I first came to the university they taught me the basics.

“They started from scratch with me. When I’m in the gym with them they push me. Their aim is to not let me get hit.

“It disciplines me because I have to keep my weight and watch what I eat and drink. I also had to reduce the partying so God willing that will help me win the championships again this year,” he said.

Kingston’s boxing society has produced 14 gold medallists within its 10 years of existence.

In Babasanya’s first year he won his first fight against Surrey University in the Varsity competition where he knocked out his opponent.

Hassan said: “Last year Emmanuel came on the scene as an unknown and an underdog, despite that we were well aware of his capabilities. He put his head to the grindstone. He listened to the instructions. He followed the routine and path that we set for him then and succeeded.”

Babasanya is a growing inspiration in the boxing gym, which hosts up to 100 people every Tuesday. He is known amongst the young boxers for his work ethic and dedication.

The head coach’s son Hamza Hassan said: “He’s the hardest trainer here. Whenever he comes he puts everything into it. His fights are very entertaining. Everything he does is fluent. He’s really good at what he does. I watch him and learn from him, he’s someone to look up to. I want to be just like him.”

Babasanya has disadvantages as a boxer because he is very small in stature. He is 5ft and 3ins. However, he has the advantage of tenacity and the fact that he is being coached by the experienced Tahir Hassan and Raheel Butt, who are amateur coaches with combative martial art skills and have worked with professionals.