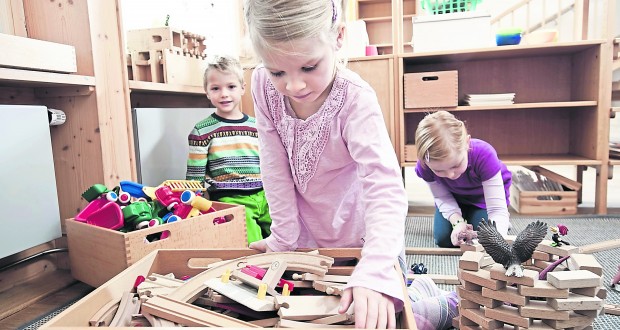 Families all over the country are being affected by the rise in nursery fees (photo: REX)

Written by Alexandra Pedersen on January 30 2016

KU parents have condemned a move by the university nursery to add an extra top-up to the nursery bills.
During the past year the nursery has been charging the difference between government grants and their regular rates, which adds up to an annual increase of £1,500 for staff and £416 for students.

James Orwell, associate professor of computer science and parent of a three-year-old son who is in the nursery four times a week, said: “They have moved themselves from being the good guys in the nursery early years funding.

“I’m getting increasingly frustrated with the management; it is taking them a long time to sort this and find a good solution for everyone.

“It has almost been a year. This was first raised with them in September 2015, which is £1,500 they’ve taken off me and other parents that they are probably not going to give back.”

The nursery currently has seven staff users and 15 student users.

Jayne Aldridge, deputy director of student services, explained that they now have spread the early years funding across the whole year, instead of charging parents every four or five weeks, which should enable a more regular monthly invoice.

“It was important for us to give as much certainty to nursery users as possible, particularly to those with limited income,” Aldridge said.
Orwell said that an e-mail from the dean of students, Bruce Armstrong, explained that it was not the intention of the University to make a profit, and fees were only there to cover staff wages.

“I don’t want this to affect the staff so that they could not be paid enough. It could be that the University is paying good wages, and then what we are effectively doing is following the race to the bottom,” Orwell said.

A Kingston spokesperson said: “If the nursery was required to change the way it currently calculates the cost of nursery provision, a range of other options would be considered in order to ensure the nursery remains financially sustainable.

“We pride ourselves on being able to offer students support with childcare and education while they study at the University.”

Charis Penfold, Director of Education Services for Achieving for Children, Kingston and Richmond’s social enterprise children’s services company said: “Every three and four year old is entitled to 15 hours of free early education and this should be delivered free at the point of delivery.

“Settings should not be asking parents for a ‘top up’ as this is not compliant with the early years code of practice.”

Currently, local authorities grant nurseries 15 hours of free childcare weekly, known as “early years funding”, but for private nurseries the fee is often not enough to cover the expenses, which leaves the nursery with a gap to fill.

While the Government’s “statutory guidance” states that the 15 hours should be free for parents, the nursery is charging parents the difference between the £4/hour for the 15 hours ‘early years funding’ and the regular rates. This is an annual increase of £1,500 for staff and £416 for students.

Orwell said the issue for him was not whether the nursery could work out some small print that enables them to charge a top-up, but an issue of an educational provider not playing by the rules, that exists to protect pupils and parents.