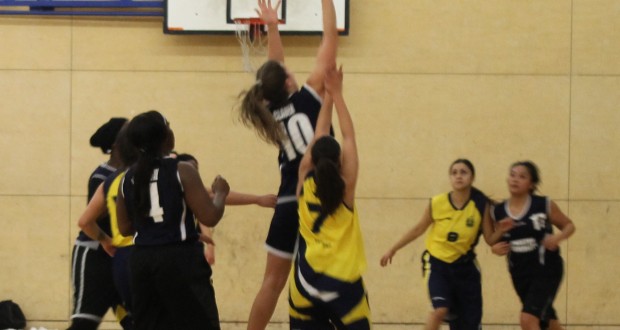 Bouncing from Brunel to Brighton

Written by Tyrone Stewart on February 2 2016

The comfortable victory is the Cougars’ third win on the bounce, improving their record to five wins, one loss, and left the team captain very proud of her team’s performance against the side from Uxbridge.

After the game, a delighted Izy Ordana said: “It was really good. I found that we were going hard from the beginning. We know that Brunel are second last in the league and we didn’t want our mentality to be ‘they’re second last let’s go down to their game’. “

The game started off scrappily, with both teams trading fouls and converting from the free throw line, but Kingston would eventually settle.

The first quarter ended 25-9, beginning the domination, and they would go in at the half having only conceded four in the second – 45-13.

They continued all guns blazing into the third, with classy passing and transitional play, the play of the game coming from a break after the half.

The Cougars ended the game with a flourish, going on a late 10-point scoring run to add insult to injury for the poor Brunel side.

Ordana said: “To be fair, some of the shots that went in-and-out could have gone in. I felt like Brunel should not have scored as much as they did – if I am really tough on my team.”

The impressive display means that the Cougars are now just three points behind their rivals, Brighton, in the South Eastern 2A division and Ordana is confident that the seasiders can be knocked off their perch.

The shooting guard said: “We are second in the league. Our rival stopping us from getting to the top is Brighton – we have a fixture with them on March 7 over there. It looks like, if we do beat them, we will become first purely because of goal differences.

“From here on, we’ll just go and rack up the points so that when we do beat Brighton, we will become first.

“I am confident, that was not even our best squad, there are two other people but they had to do coursework today. We’ve got this, I am very positive we will beat Brighton when we go there,” she added.