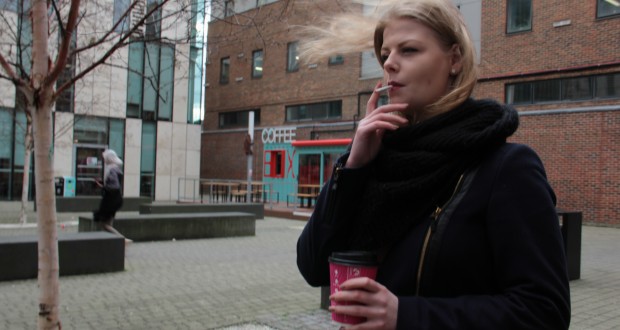 Students continue to smoke in the courtyard despite the recent ban

Written by Alexandra Pedersen on February 13 2016

KU students have pledged to carry on lighting up in one of KU’s most popular smoking spots – despite a university ban coming into force.

Smokers have made the John Galsworthy courtyard at Penhryn Road campus one of the top places to have a cigarette and chat to friends.

Many students are still unaware that the launch of Coffee Box last month meant that they were no longer allowed to smoke in the courtyard – and those who were said they will continue to smoke.

Rebecca, a forensic analysis masters student, who was standing next to one of the new ‘no smoking signs’, said: “I was just standing here because it was raining and there is shelter here. I didn’t even see the sign, I always smoke here.

“I didn’t realise you couldn’t. I don’t think anyone really realises, because everyone is smoking out here. Otherwise they just don’t care.”

Salman, a third year civil engineering student, and Regina, a first year international relations student, agreed that the new smoking ban is meaningless to most students, and that even those who know will continue to smoke.

Regina said: “I think it is stupid. Everybody ignores it anyway. Why should I not be able to smoke outside?”

Salman added: “By law, I’m technically allowed to; it’s an open space so they can’t ban me from smoking here. I’ve seen the signs, but I don’t care, I’m outside so I can smoke here.”

The existing guidelines for smoking on campus say that there should not be any smoking within 10 metres of a building entrance or near open windows.

These are in place in order to reduce the likelihood of people inadvertently inhaling smoke as they make their way in and out of buildings.

Ian Appleford, KU head of health, safety and security, said: “There are several outside areas where people can smoke, but where they are likely to have less impact on non-smokers. As food is now being served in this area, we feel users will appreciate it being smoke-free.”

He also explained that there are notices informing people of these restrictions across all campuses and that seats and ashtrays are provided outside the main entrance if people need to smoke on campus.

Other smoking areas on Penrhyn Road campus include the Services Building yard, the Sopwith building car park and the far edge of the Fassett Road car park, away from the Eadweard Muybridge building.

Julia, a third year sustainable development student, said: “With the opening of the Coffee Box, I just think that it is not appropriate anymore. The smell was a nuisance before, but I definitely don’t want to deal with it when I’m trying to enjoy a cup of tea outside with my friends.”

Prof Peter Weissberg, medical director at the British Heart Foundation, said: “Banning smoking in public places leads to fewer deaths from heart disease and that this effect is greatest in the non-smoking population. So this has been a successful piece of legislation.”