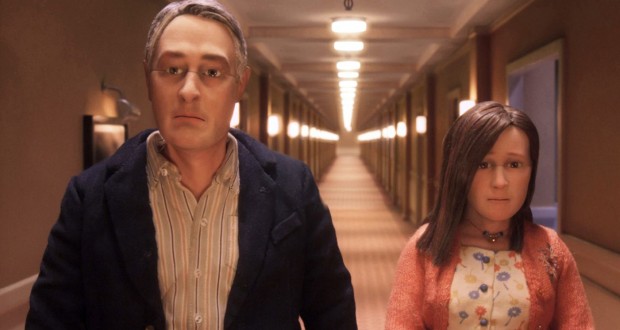 Anomalisa: Pretentious puppets are a let-down even during sex

Coming from Being John Malkovich writer Charlie Kaufman, Anomalisa is a character study on the mundanity of middle-age, the fragility of the human psyche in the face of crippling loneliness, and the blissful yet brief respite of genuine human connection – told entirely with stop-motion puppets.

Michael Stone (voiced by David Thewlis), a married motivational speaker semi-notable for his customer service manual, is overwhelmed by the monotony of his day-to-day existence. When he meets the enigmatic yet endearingly dim Lisa (The Hateful Eight’s Jennifer Jason Leigh), he begins an affair that he hopes will break his crisis of self.

Said crisis manifests itself in the voice work of the other puppets. Michael and Lisa aside, every one else (male or female) is voiced by noted character actor Tom Noonan. It’s a startlingly effective conceit, that places the viewer straight into Michael’s mindset. It also, unfortunately, makes for crushingly tedious viewing.

Once the intelligence of Anomalisa’s satirical look at modern life is forgotten in favour of a more personal narrative, the film nosedives into self-indulgence. What would have made for a blistering short film here becomes an assault on patience as a full-length feature.

Michael is an intensely unsympathetic lead; narcissistic, morose, and abusive, exploiting his own position of power and Lisa’s lack of self-esteem and intelligence in order to bed her in a genuinely uncomfortable round of puppet sex. His lack of remorse in his actions comes off less like an intentional commentary on the selfishness of contemporary human freedom, and more like Kaufman’s gross vision of a tortured soul.

Technically, Anomalisa is a marvel. Beautifully animated and with impressive vocal performances across the board, as a sheer proof of concept it’s faultless. But as a film in its own right, it’s intolerably pretentious and unlikeable. A film with little to say yet enamored by its own voice, Anomalisa is Boyhood by way of Aardman Studios. One for animation enthusiasts and art house-lovers only.

Anomalisa is in cinemas from today, rated 18.