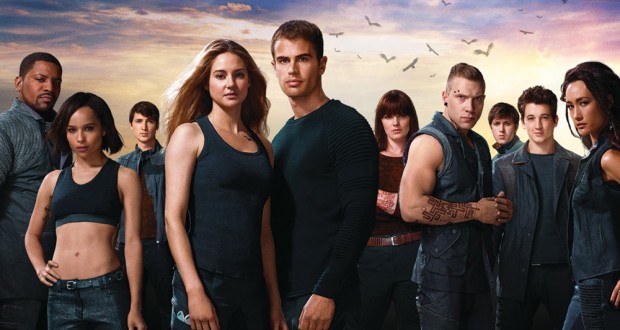 The cast of Allegiant (credit: ajc)

The third in the Divergent franchise, Allegiant continues where Insurgent left off; the factions broken, the regime toppled, and a world of possibilities waiting outside the wall that surrounds post-apocalyptic Chicago. Now, Tris (Shailene Woodley, making the absolute best of the bland dialogue she’s given) and Four (Theo James, pretty but a virtual charisma-vacuum) must venture forth to find the rest of humanity, no matter the dangers and new enemies they may face.

There’s something endearingly hokey about Allegiant, a sumptuously silly science-fiction film buried under a mountain of clichéd teen-angst and forced romantic sub-plots.
Miles Teller returns as Peter, bringing his standard ‘smug teenager’ act to the fore with material that – since Whiplash – is clearly beneath him. Meanwhile, Jeff Daniels is the new addition to the cast as Director David, the charming bureaucratic leader of a far-flung human colony.

Indeed if there are surprises to be had in Allegiant, they don’t come in the form of its narrative, but instead the performances and direction.
Returning director Robert Schwentke makes more than a few notably odd visual decisions, but imbues the action sequences with an impressive amount of flair. Production design is also top-notch, with some cracking physical effects only ever let down by cheap VFX.

Allegiant isn’t especially big, nor is it stupendously clever. But fans of the franchise will be more than satisfied with this latest iteration, and there’s far more offensive popcorn-fare out there.

Allegiant is in cinemas now, rated 12A