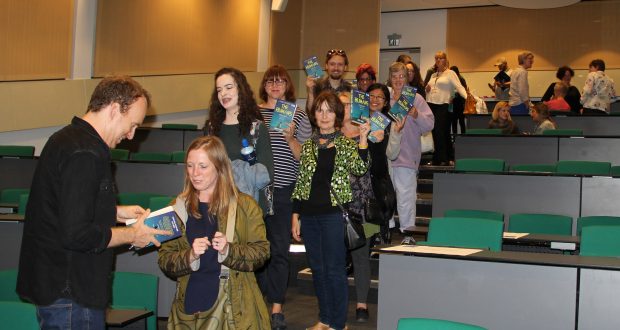 A love letter to humans

Written by Johanna Christoph on September 30 2016

The Humans tells the story of an alien, who comes to earth to stop the progress of mankind. The alien settles in the body of the mathematics professor Dr Andrew Martin, and experiences human interaction. The alien overcomes his prejudices and learns what it means to love, to enjoy beauty and appreciate the flaws within the humans.

“The story of this alien’s journey is similar to my journey when I was younger, when I was depressed and I came out of depression and I became less cynical and more capable of love and feeling all these nice human virtues. I think it’s my most optimistic book,” Haig said.

The Kingston University (KU) Big Read gave 30,000 free copies of The Humans to KU students. Haig gave an insightful and moving talk yesterday evening, before dozens of students, lecturers and fans who had read the story of the alien in the human body.

Haig, born in Sheffield, studied at Leeds and Hull and had a bumpy path throughout his university years. He had a wild student life, he changed courses, he wasn’t quite sure what he wanted to do – and then he got hit by depression at the age of 24.

The Humans can be seen as a tragicomic metaphor of Haig’s recovery from his depression and his journey back into a life where he is capable of seeing the beauty of life and rediscover the love for being alive. A journey, apparently, a lot of people were able to relate to, indicated by the numbers of intrigued listeners at the Big Read event.

Associate professor in publishing Alison Baverstock, a member of the selection panel, said this year’s book choice spoke much better to the students than last year’s About a Boy, by Nick Hornby.

“Many more people read the book this year, including staff and academics; maths and physics departments particularly loved it. It’s very exciting to see how widely it has been used and shared,” said Baverstock. “It’s a very anxious time before you go to the university and the books sent to new students made KU look a bit different from other universities.”

As KU Big Read is gathering interest from other universities, next year’s book will be shared with Edinburgh Napier University. “They are both very similar institutions but there are some significant differences,” said Ms Baverstock. “It’d be interesting to see how it compares to both places.”