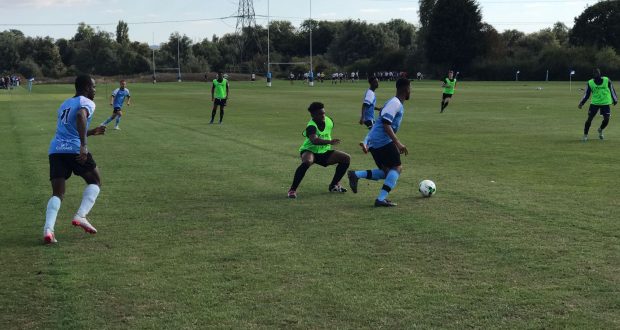 KU's midfielder Amani Nyelia breaking from midfield in the first half

Written by Laurence Bohan on October 11 2016

Kingston’s men and women’s football teams suffered heavy home defeats against Roehampton on Wednesday in a mixed day all round for the cougars in the annual Mini Varsity event.

The second and third men’s team went down 5-2 and 4-2 respectively to their rival counterparts while an injury-ravaged first team lost 3-0 to theirs although did not come out of the game without positives.

After the game midfielder and captain, Sam Pledger, said: “If we play like that this season, especially the way we played first half, we will destroy most teams in our league.  I don’t think anybody had a bad game.”

The first team were already short on numbers before kick off with several key players out injured meaning several of the team had to stay on whilst carrying niggles; including midfielder Pledger and central defender, Greg Potts.

“Second half we just didn’t have a squad, the team are shattered right now. We didn’t deserve to lose 3-0.”

“If we would have played in the second half the way we did in the first we would have beaten them. But you can’t play like that for 90 minutes, you just can’t,” added Ledger.

The cougars finished the first half 1-0 down, a half in which they did not create many clear goal scoring opportunities but did have an even share of the possession and looked particularly dangerous from corners, hitting the woodwork from one early on after a teasing delivery from Ledger just evaded the out-stretched leg of forward Gurpz Tatla.

After a slow start to the second half, Kingston went searching for the equaliser, coming close when some good work down the right from tricky winger Andy Soulja  led to a powerful effort from Pledger which forced a good save from the Roehampton goalkeeper.

Kingston’s best chance of the game came when tireless left winger Hadhi Habboushi  expertly beat his man to get through on goal only to see his curling effort blocked by a covering Roehampton defender when the goal seemed certain.

KU’s relentless pursuit of finding the equaliser was eventually capitalised on as they were caught on the break as Roehampton grabbed a second and then a late third with their talented forward Cedric Ake, older brother of Chelsea FC defender Nathan Ake, grabbing his second goal of the game.

“If we would have scored in first half it could have been very different. Roehampton are gifted footballers to be fair, we won’t play a team as good as that again this year,” said an upbeat Pledger.

The team knew heading into the game that they were unlikely to come up against a team of Roehampton’s quality again this season yet they held their own for the majority of game and showed glimpses, especially in the first half, of why they will be one of the favourites for promotion come the start of the BUCS South Eastern 4C league on October 12.

The news  for the women’s football first team was not any better as they crashed to a 5-0 defeat to Roehampton’s high-flying women.

There was however better news for KU’s netball teams in Mini Varsity as both the women’s first and second teams picked up preseason wins. The second team won 26-13 while the firsts ran out 38-29 winners.