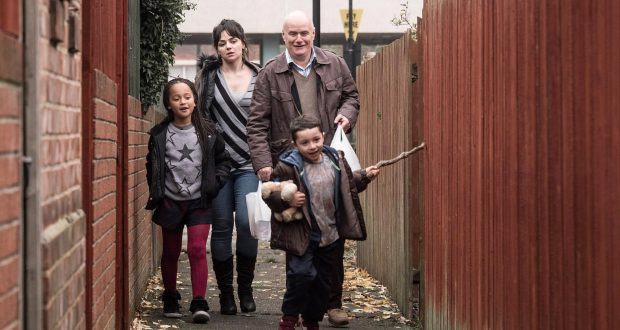 Written by Johanna Christoph on October 28 2016

“I, Daniel Blake”, Ken Loach’s stunning and distressing new drama, is a wake-up call and shows brutally honestly and poignantly the errors of the benefits system. Loach is known as a leftist, socially critical director addressing issues like poverty and homelessness in his movies. “I, Daniel Blake” won the Palme D’Or at the Cannes Film Festival this year.

Set in the northeast of England, this film shows the hard journey of middle-aged carpenter Daniel Blake, a widower without children, who is unable to keep working due to his heart condition and is therefore looking to get benefits. He meets unemployed single mother of two, Katie, who could not find an affordable flat in London anymore, so she moved to Newcastle, and after she misses her job centre appointment, she has to wait to get her benefits. With no money, two children and a flat without electricity and gas, she hardly comes by.

The story of the two adults struggling to keep their dignity and pride, featuring Dave Johns as Daniel Blake and Hayley Squires as Katie, is especially painful to watch as the two are portrayed as such likeable, relatable characters that one meets in their everyday lives it makes the overall film all the more stirring.

Blake, as an unapologetic, funny and ironic man looking to receive benefits from the state due to his health condition shows in a moving way the struggle that is today oftentimes overlooked in British TV and films.

In tragicomic moments the film shows not only the countless hardships these people have to endure, the hunger and poverty, the crumbling of one’s dignity – but it also shows the human and heart-warming side, when people, with small actions out of kindness and compassion, can move so much.

Daniel helps Katie sort out her new flat and helps her take care of her kids, despite him having his own problems. Daniel’s two neighbours, two young men, help him fill in and print out his online applications for the benefits systems because he does not have a computer or knows how to use one. Katie gives her own meal to Daniel in gratitude, despite being hungry herself.

All these little moments of humanity are well portrayed and never seem too cliché or too kitschy, just carefully composed to look as realistic and understandable as possible.

With unsettling scenes Loach manages to point out how individual people and their stories become numbers at the job centre. The application for benefits itself already becomes a challenge for Blake, as he does not own a computer and does not know how to use one. These things become even more challenges on his way to actually fill out his application, and the time works against him.

The system that has moved nearly completely to online applications becomes a barrier in itself and makes the whole process even harder for people who, like Blake, have no easy access to a computer or the internet.

Once he managed to file his application, he has to apply for jobs and has to proof that he spent a certain amount of time searching for one. The job centre does not accept his old-fashioned way of walking from door to door to ask if someone has work and threatens to sanction him.

With simple but strong scenes the movie shows the difficulties and hardships people face while on benefits – or struggling to receive them. It shows painfully honest the struggle to keep one’s dignity when exhausted by hunger and fatigue.

Hope and disappointment are a constant theme all throughout this compelling and moving mirror of the benefits system. Ken Loach’s drama is well worth to watch and leaves the viewer deeply moved and shaken by this unadorned and honest story of Daniel Blake.