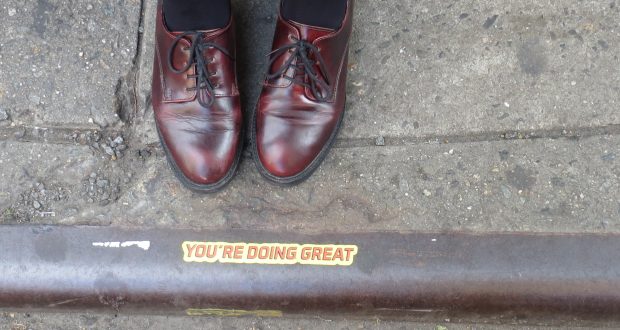 Written by Chanelle Field on November 9 2016

Former Kingston University students Claire Heywood and Paolo Ruiu will be releasing their debut album ‘Another’s blood’ through Banquet Records this month. The album release follows live performances in Kingston at the Fighting Cocks in September in support of Joanna Gruesome, and also at the Hippodrome in October to support White lies.

Claire and Paolo met at Knights Park on their first night at KU and started a band with other students. After a year they disbanded and together formed Young Romance, an alternative indie/pop band with Claire on lead vocals and drums and Paolo on guitar.

Besides the band, music plays a big role in the duo’s lives. Claire can be found working at Banquet Records whilst Paolo is a producer at Third Floor Recording and teaches guitar.

‘Pale’, which was originally released as a 7” EP in 2014, is a demanding, lively track with beautiful vocals and a relentless drum beat that you find your foot tapping along to. ‘Pale’ brings you close to feeling like the band are live in your living room with its somewhat raw, heavily distorted guitars that bring the noise and somehow the smell of cigarettes and sweat.

‘Wasting time’ tones down the guitars and delivers a much more retro, 80s indie/pop sound. Claire could well be confused for Cyndie Lauper or Kate Bush for her fluid, spellbinding vocals and the lyrics will without a doubt get stuck in your head, however melancholic their content, such as the chorus opener “you know I don’t wanna’ love like you anymore”.

‘Disappear’ really showcases Young Romance’s writing ability. The lyrics and melody are incredibly catchy with content that most students can relate to; becoming settled into lazy, bad routines that can cause you to isolate yourself and lose everything.

“Disappear was written reflecting the feeling of someone being at their lowest because of their own actions and that things will only continue to get worse for them regardless of change,” said Claire Heywood.

“As bleak as it sounds it is more of an angry reaction to someone who will not accept their faults rather than a melancholy recoil.”

The layered, intentionally messy guitars deliver fuzzy, distorted grunge mixed with wailing toplines, whilst the drums are punchy and heavy on the cymbals for the chorus.

This well-produced album delivers beautifully haunting vocals that are laid over distorted, grunge guitars and pop-punk drums in good balance. ‘Another’s Blood’ is a catchy, indie-pop-electro package with lyrical substance that are definitely worth a listen.

The band will be headlining at The Victoria in Dalston on November 16 with further dates to be confirmed following the release of their album. They have also announced plans to begin writing a new EP at the start of 2017.

The album will be released on November 25 by Banquet Records and is available to pre-order.