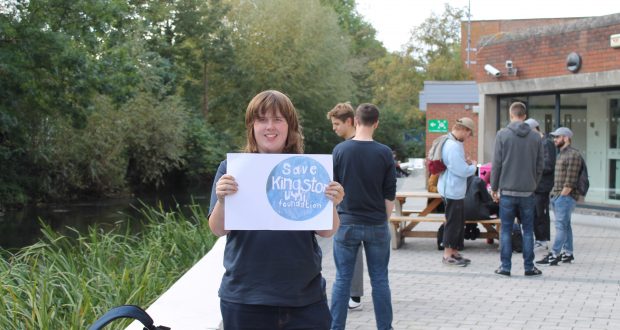 Written by Johanna Christoph on November 9 2016

Hundreds of students have signed a petition in a bid to stop the Knights Park foundation course being moved to Penrhyn Road.

Organiser, Eliot Lord, a first year fine art student, created the Save Kingston Foundation petition after hearing that the course he did last year would be relocated to Penrhyn Road campus for up to five years. The building currently used for the course at Knights Park would instead become a fine art building in a bid to accept more applicants.

“I feel like the current location near Knights Park has a great reputation so why risk it by moving to Penrhyn Road, even temporarily? They are thinking of keeping it there for five years but a reputation can be destroyed in 10  seconds,” said Lord.

Lord has dedicated the last few weeks to stopping the move and claims it is vital that the course remains at Knights Park. So far, more than 900 students have signed the petition. When 1,000 have signed it, it will be sent to the university.

The foundation course, which has around 180 students attending every year, will have classes at Penrhyn Road. But students will move to Knights Park every time they need to use the professional tools situated at the arts campus.

Lord, 19, said the artistic community around Knights Park, the small intimate nature of the course and the nearby workshops were the main reasons he chose to study at KU, and that moving it could jeopardise the success of the course.

Lord reminisced about joining KU and said: “The thing that attracted me to my course was the atmosphere, the environment we were in, this might sound shallow but the scenery around Knights Park is a lot nicer than the one around Penrhyn Road. It’s got a lot of open space and Penrhyn feels very grey, dull and closed. Over here, we are much more arty and if it was over at Penrhyn road I feel we would lose our identity and the course would lose its identity.”

Lord found out about the plans after hearing rumours. He discovered that renovations were done to the foundation campus less than a year before the decision to move it arose and described those who initiated the move as having “ulterior motives”.

The dedicated student spoke about his foundation course leader, Rebecca Davies, and the effort she put into ensuring the course was run well.

Lord said: “During my foundation course, other students and myself saw Rebecca work tirelessly to improve the space. She was not in the knowledge that this space was not going to be hers in two years. They ploughed all this money into improving the space without telling us why they are improving it and now it is all being moved.”

Lord found the decision to move the foundation course to another campus not only disadvantageous for prospective students, but for the entire university.

The university said the relocation of the art foundation course was only temporary due to refurbishments done at Knights Park campus. These are part of a £260m University-wide transformation to improve the learning environment of the students.

a KU spokeswoman said: “We have secured an alternative teaching space for foundation diploma in art students, which is just a few minutes’ walk from Knights Park. The temporary teaching location in the Tower Block at Penrhyn Road will offer students the opportunity to work in large open plan areas with excellent light levels and will be fully equipped with all the facilities they require.”

Lord also argued that the degree students did not come in every day and therefore would not need the building as much as the foundation students.

“From what I have been told it all sounds like a disaster for future foundation students,” he said.

Randolfi admitted he had seen moves at other universities such as the University of London where the Cass Art building was closed to bring it closer to the main campus. He said the move here was distancing itself from the main facilities students needed.

“Giving that space to the degree would make little sense, because not everyone chooses that route of coming in every day to do their work, a lot of peoplework from home. You don’t see that on foundation, you see that on degree,” said Lord.

Sarah Elizabeth Curran, 19, a first-year fashion student, who attended the art foundation course last year, said that she moved from Newcastle to Kingston because of the benefits KU offers its art students at the Knights Park campus specifically.

“Moving the country’s best foundation course to the comparably grey landscape and ill-equipped Penrhyn Road is nothing short of ludicrous.”