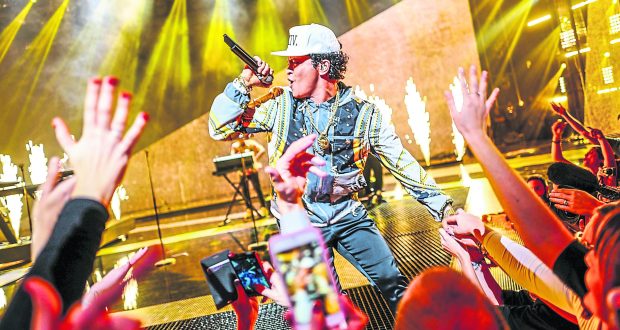 Written by Johanna Christoph on November 26 2016

Bruno Mars’s new album meets the expectation and delivers happy, swinging 90s funk and R&B. The 90s nostalgia is evident throughout the whole album and gives ’24k Magic’ a slightly more mature tone than its preceding record.
Mars’s third studio album 24k Magic had a tough time reaching the genius of the previous Grammy-winning album Unorthodox Jukebox, released four years ago.
The song ’24k Magic’ is fairly similar to the 2014 hit ‘Uptown Funk’ in its uptempo, happy funk tune, but does not have the same kind of earworm effect as ‘Uptown Funk’ possessed.

‘Versace on the Floor’ reminds a lot of the late Michael Jackson as it is a slow, lyrics-led start accompanied by soft piano tunes and build up to a 90s pop chorus.

The pop ballad ‘Too Good to Say Goodbye’ is quiet and increases the feeling of wistful 90s revival even more, the song provides a catchy love hymn with melodic tunes and meaningful lyrics.
Heartfelt lines like “Yeah, I’m still in love with you, darlin’/ I know you feel the same/ Oh, what’s the point of both of us being brokenhearted?/I pray it’s never too late” give Mars’s song the right amount of emotional impact on the well-balanced album.

’24k Magic’ is an entertaining album well worth the wait. Mars delivers just the right mix of happy dance funk, 90s-inspired R&B and pop as well as emotional ballads.
Like in his previous albums, Mars shows off his remarkable vocal capacity. Although ’24k Magic’ does not have the same number 1 hit tracks like ‘Unorthodox Jukebox’ had, the record is solid and thoroughly enjoyable.