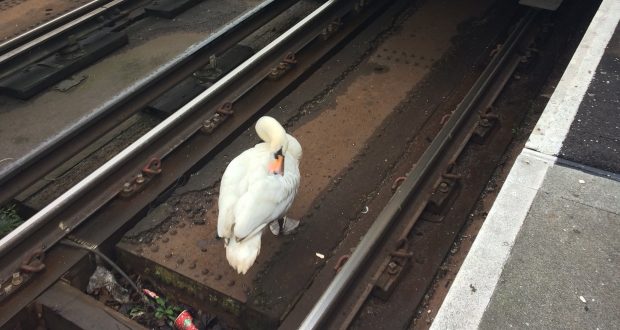 Services were held up after a swan sat on the train tracks at Kingston Station. Photo credit: Shani Kotecha

A swan on the tracks at Kingston station held up a train en route to London Waterloo for around 15 minutes on Friday morning.

At 10:15am passengers were forced to stand in the snow as the swan sat unmoving in front of the train for 6-7 minutes.

One passenger travelling to London Waterloo said: “I do have somewhere to be but I’m not too bothered by this delay. It’s quite a novel thing to see.

“Calling the RSPB would be logical thing to do, but apparently it walked all the way down from another station, maybe Hampton or something.” 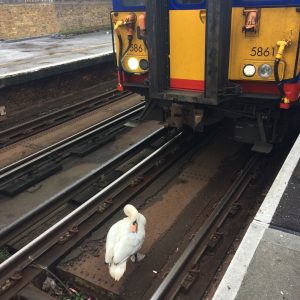 The swan is believed to have gone back to Kingston riverside. Photo credit: Shani Kotecha

The train driver initially tried to scare off the swan by inching the train forward, but eventually was forced to stand stationary with the doors shut.

Another passenger attempted to move the swan by poking it with an umbrella, which forced the bird in between the two train tracks.

The swan moved between the platforms and walked towards the back of the train, at which point the train continued its journey.

The train driver said: “The swan moved on to the other line, and we think it left the station.

“Hopefully it has gone back to the river, but this is the first time something like this has ever happened to me.”

The service was forced to skip all the regular stops apart from Norbiton, and headed straight to Waterloo to compensate for delays.