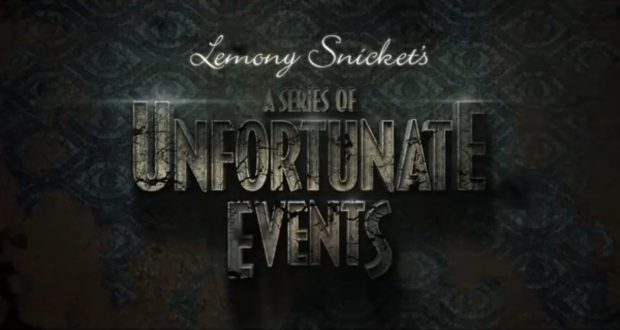 Netflix’s A Series of Unfortunate Events: Lemony Snicket would be proud

Written by Sarah Sinclair on January 17 2017

The opening titles of Netflix’s first instalment of A Series of Unfortunate Events was enough to know this presentation of the Baudelaire children’s fate would do Lemony Snicket proud.

For those unfamiliar with the premise of the series, it is a book adaptation that tells the tale of three orphaned children who have a great fortune of which their bizarre cousin, Count Olaf, presides to try and claim through disguises, murders and other unpleasant deeds.

The children’s story is also surrounded by mystery of how their parents died and what weird secret society is it that seems to be alluded to.

However, You are warned that if you like stories with happy endings you should look elsewhere.

Netflix based their advertising campaign on this premise, brought straight from the novels. The campaign was fitting for those that know the story from the novels or the previous 2004 big-screen adaptation with Jim Carrey and Meryl Streep.

No one would be faulted for thinking the series was a Wes Anderson production if you were judging by the visuals and musical accompaniment.

The grey areas of despair in the sets fulfil the gothic themes of abandonment with a steampunk edge.

These dark and perhaps Burton-inspired sets are highlighted by bright backgrounds and accents that give you a false hope of the niceties the Baudelaire’s will not experience.

However, you will have to forgive the distracting CGI that is used on Sunny, the youngest child, at some points but the scenes showing her extreme dental abilities were spot on and snigger-worthy.

The story of children wiser beyond their years compared to adults with society-induced stupidity is kept pure with the recurring vocabulary explanations that the adults try to patronise the children with.

But this comes at no surprise considering Daniel Handler (aka Lemony Snicket) scripted and co-produced the series.

The series has been kept incredibly smart and, with references to, godfather of soul, James Brown and, Moby Dick author, Herman Melville, it is not just for kids. It is a series that can grow up alongside you.

The 2004 film moved far too swiftly but this series, covering about half a book per episode, gives the opportunity for the depth it deserves. This series includes the astute narration from Lemony Snicket, for without it it would not be the series fans have come to love.

Formally meeting Count Olaf was a theatrical journey with plenty to snigger at. Neil Patrick Harris’ portrayal of Count Olaf was brilliant, idiotic and humorous but he did not strike me with fear.

But Neil Patrick Harris is more of a pantomime villain than one children would be scared of.

The gags, references and theatricality, no matter how enjoyable and well done, did tend to overtake the supposed despair you are meant to be feeling for the Baudelaire children.

But you do still have the aura of mystery the recurring trope of mysterious eyes and the suggestion of a secret society.

And a Friday 13 release date could not have been better.