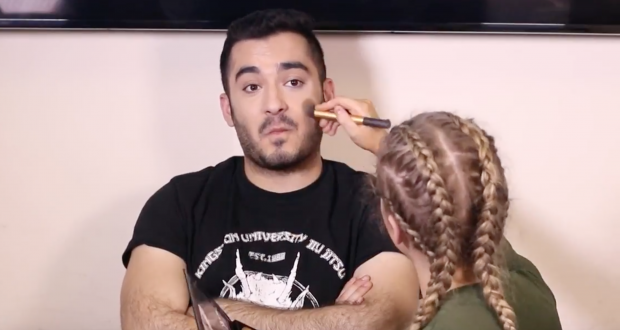 The next male Covergirls? Three straight men at KU face their fears by wearing makeup for a day

Scroll down to see the video.

After the first male Covergirl, James Charles, was introduced last autumn, he made his name on social media by defying gender stereotypes. To see if any man can wear makeup without being labelled as feminine, we picked out three men at KU to try it for one day.

“Just no red lipstick! I only like pink or bright blue.”

Behind the joke was a hint of true fear. While some guys do wear makeup in their day-to-day lives, KU psychology student Hamid Panah had never touched the stuff.

Yet he had agreed to meet the River team at 10am for a full makeover, which he would have to wear to work, a career fair, and even an evening workout session.

With him was computer science student Toby Ojo and journalism student Dino Groshell, both of whom were in for a full day of classes at the university.

“I wish we had a mirror here right now,” Mr Ojo mumbled as a River member started applying foundation to his face. “I have quite feminine features.”

He grimaced whenever the makeup brush went anywhere near his eyes, but there were no complaints, and the colours really did brighten up his face.

To his relief, there was no bright red lipstick, eye shadow or mascara, but simply a matte foundation base, some contouring and a touch-up on the eyebrows.

The best part was that you really couldn’t tell.

“Yeah, you know what?” he said at the end, taking a Snapchat selfie with his phone. “I’m actually feeling this!”

“I feel fabulous,” Dino exclaimed with a laugh after seeing himself in the mirror, and said that while not immediately obvious, the makeup had hidden his imperfections.

Now, it remained to see if their friends or colleagues would notice.