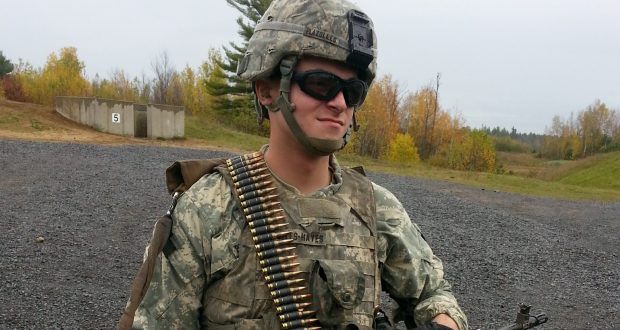 Simon Plazolles-Hayes in his army gear

‘Till the day I die, I will never regret serving my country’

Written by Karan Ahluwalia on October 16 2017

KU student recalls his experience in the US army and how it shaped his life.

A Kingston student shares his experience of serving in the US army as the recent exchange of name-calling between the US and North Korean leaders has raised the threat of nuclear calamity.

Plazolles-Hayes believes that were not for his army experience he would not be the man he is. It was the army that gave him the drive to apply to Kingston.

“I may not physically wear my uniform anymore, but I’ll never be able to take it off. The army isn’t school or work. You don’t go to unwind. It is your life. You prepare for anything, to suffer in silence, to be a leader, to never back down, to be courteous and professional, and when the time calls for- to destroy,” said Plazolles-Hayes.

During his years in the army Plazolles-Hayes put in numerous official requests to be deployed to Afghanistan with the rest of his company, but was rejected.

He went through basic boot camp training for 18 weeks in the beginning of his service with varying difficulties.

As an infantryman Plazolles-Hayes endured constant training and was taught scenarios that would come up in a war, learning reflex responses to when bullets fly and bodies fall.

“You can’t hesitate or second guess yourself. I can’t, and don’t really want to kick that habit. I try to be prepared for any fight or situation that comes up. Because you never know what can happen,” he said.

Plazolles-Hayes was honourably discharged in February 2015, yet he confesses to still vicariously living through his memories of doing grenade training, shooting Javelin missiles in the Mojave Desert, kicking down doors and going on live-fire exercises when he gets bored in class.

He left the army after reaching a point where he knew his time was up. He chose not to re-enlist and instead transitioned back to being a civilian.

“I was a hell of a soldier, and I was good at it. How can you undo three solid years of intense training, discipline, and camaraderie? I still hold the oath of “I will never accept defeat” to heart,” he said.

When asked whether he was ever in a situation where he had to shoot someone he refuses to answer, stating: “If a veteran has taken a life, it is not something that he may or may not want to talk about”.

He adds that during the three years of his service there were times when he was depressed.

While the world shares a rather critical view of USA’s involvement in various war zones, Plazolles-Hayes is proud of his years of service.

“Till the day I die, I will never regret my service to my country. I put three years of my life in defence of the United States, and I served with the finest men I will ever meet. My service made me the man I am today, and I wear my veteran status with pride. Hooah,” he said.