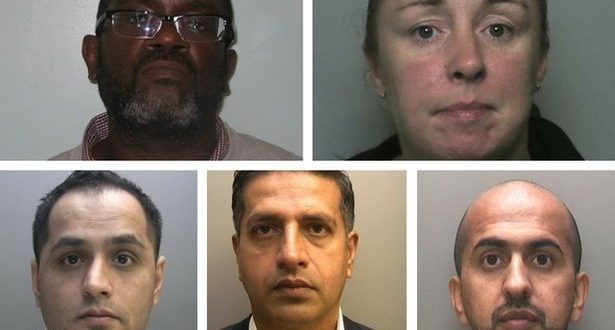 5 of the multiple network of fraudsters

Written by Sophie McConnell on October 19 2017

A staff member from Kingston University signed off a cheque, totalling £1.75 million, to a ‘sophisticated’ group of fraudsters.

The scammers conned NHS hospitals, councils and a local government out of more than £12 million, but were jailed, in some cases for 10 years, at Leicester Crown Court during summer.

After sentencing, Detective Sargent Mike Billam said: “I am pleased to say that with the assistance of law enforcement in Dubai, Poland and other countries, this investigation has got to the heart of this conspiracy and has disabled what was clearly an international organised crime group.”

The attack on Kingston University was part of a high stakes criminal conspiracy, which fooled 22 mostly public bodies into handing over the money by sending forged letters claiming to be from legitimate building contractors carrying out work for the organisation.

In total the team of fraudsters were made up of 10 conspirators from all over the UK and Dubai, who all took advantage of the fact that public sector contracts are freely available to see, under financial transparency rules.

Among the conspirators was a former nightclub toiletries’ seller, company directors and a newsagent.

Each of the 22 cases involved with the investigation included forged letters, emails or faxes, which were sent to the targeted organisations, pretending to be for legitimate firms.

These correspondences announced a change of bank details to overseas accounts operated by the gang who then laundered the money through other legitimate businesses.

Some of the letters they sent, complete with company logos, false signatories and reference numbers, had actually been faxed from an Internet cafe in Dalston, east London.

Sentencing ten of those involved at Leicester Crown Court, Judge Philip Head said: “This was a sophisticated and widespread fraud in its conception and execution”,

Jailing the conspirators for between ten years and 22 weeks, he added: “these bodies were selected because it was hoped their accounting processes would be vulnerable forgery.”

He added: “The loss falls necessarily on those who are not able to pay it, ultimately the members of the public whose taxes fund these bodies.”

The biggest victim was the Guernsey government, which lost £2.6 million, when cash was funnelled into seven separate accounts.

In another case, a £1.28 million payment to build a mental health unit at Lincoln’s St George’s Hospital was only just diverted due to NHS trust staff failing to check the new bank details supplied.

It was only when an employee of the building firm Costain saw the fake letter, with an out of place logo and a false reference number with signatures, that the alarm was raised.

Lincolnshire Partnership NHS Foundation Trust then called in the police at the end of 2011, sparking a lengthy investigation, led by Lincolnshire Police with support from NHS Protect.

Although the investigation is closed, Nigerian national, Bayo Awonorin, who was identified in court by the judge as the ‘prime-mover’, is still at large, having failed to answer to police bail.

A spokeswomen for Kingston University said: “The attempted fraudulent transaction was detected and the University did not lose any money.”

“The University takes any allegation or suspicion of fraudulent activity extremely seriously and has a strong set of checks and balances in place.”

“Any allegations of financial irregularity are investigated thoroughly and the University will always notify police and any other relevant authorities as and where appropriate,” they added.