Q & A with Gail Emms

Written by River Reporter on October 3 2013 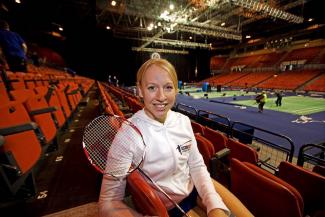 From the court to the classroom and back again, Kingston graduate Gail Emms knows only one way of life.

Since first picking up a racket at the age of four, the former Badminton world no.1 has enjoyed unrivaled success on the court, picking up a silver medal at the Athens Olympics in 2004, as well as an array of golds in Commonwealth Games, and both World and European Championships.

Some 15 years on from her life in Kingston, Emms spills the beans on her experiences at university, as well as life afterwards.

You started playing badminton at an incredibly early age. How did that come about?

It could have been even earlier than four actually. My parents were members of a badminton club not far from where I lived. My mum and dad dragged my siblings and I along to watch, gave me a racket and hit with me between their matches. It wasn’t until I was seven, though, that I joined a club, as that was the minimum age you had to be.

Fast forwarding a bit to your days at university, why did you choose Kingston?

I was originally going to do Physiotherapy at Brunel but I didn’t make it in. I knew people were training at Wimbledon, just down the road from Kingston, so it was close to there. I had the option of doing Physio after Sports Science so it was a very easy decision to make. I decided in about half an hour!

What sort of level were you playing badminton at?

I’d played England juniors and already got my first England cap by the time I arrived at university. Back then, it wasn’t quite what it is now. I couldn’t do quite as much training as I wanted as there weren’t the same opportunities as there are now. As a result, I took a step back to enjoy university. I was still good enough but I just couldn’t play to my maximum.

What halls did you go into?

I was at Seething Wells. I think we were the first people to live there as the university was beginning to expand.

I was okay. Better than some! I learnt a lot and tried to get better and I was one of the healthiest eaters I knew. I wasn’t a Tesco value baked beans or pasta kind of girl so I made sure I had enough money to buy nice, healthy food.

Were you a reserved student or did you like to see yourself as a party animal?

I was a bit of both to be honest. I had my monents of being a party animal. There were times I had to reign it in as I had tournaments coming up. I just had so much fun and I remember thinking I’d grown up a lot. You learn so much about yourself and about life in general.

Where in Kingston did you like to go out?

We often went to a place called ‘Volts’, which I believe is where Chicoland and Hippodrome is now. In terms of eating, I always grabbed a sandwich at the student union and there was O’Neill’s. We went there quite often. There were some nice pubs along the river too. Do people still do that?!

What lessons did you learn at university, about yourself and about life?

I learnt about dealing with other people. I had a pretty sheltered life but I went to school, worked hard and played my sport. When I went to university I thought everybody would be like me but I learnt everybody’s different. It’s exciting to learn about other people and living with them. I was so used to living with mum and dad so it’s just that compromise of not getting into arguments. I think it’s those life skills which are invaluable, when to get on with people, bite your tongue, stand up for yourself, let it go – all these things you take into sport and how to get the most out of yourself.

Do you ever come back to Kingston?

I have some friends there so I drive through quite often. It’s a lovely place. I wish I could come back more often.

After university, you enjoyed an incredibly successful career in badminton. How do you think your relationship with your brother, Adam, helped you forge a strong relationship with Nathan Robertson on the court?

My brother and I are very alike in personality. I’m not a typical girly girl. I like the blokey side of sport and I think that helped me work with guys. You have to be a bit blokey in a way so for me and Nathan our personalities worked well together. I believe he’s my soulmate in badminton. 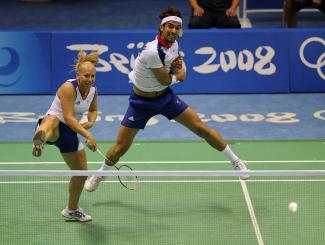 Do you want your kids to follow in your footsteps?

My other half and I are obviously really sporty so it’s only natural that Harry, being the oldest at three-and-a-half years, wants to do what we’re doing. I do think sport is so important to youngsters. I see so many overweight and obese children who should be running around and they’re not. That’s what kids should be doing.

How influential has your partner been in your life?

I met my partner in 2005 so he had three years of watching me compete to contend with, and then he had to deal with me retiring! Sportspeople are incredibly difficult to get along with. When we’re happy we’re happy and when we’re losing it isn’t pretty at all. He’s been through a lot so maybe he deserves a medal too!

What is more challenging – walking out in front of millions of viewers in an Olympic final, or raising two children?

Raising two children. Badminton is something I know I am good at and I’m confident at. I’ve done it my whole life. Raising two kids is something I’ve never done before so I don’t know if I’m any good at it! People are far more judgmental when they are a mum but in badminton it’s just a case of going and doing it. If you win you win and if you lose you lose.

Finally, what advice would you give to students aspiring to become professional athletes?

Be organised. If there’s something you want to do in sport go and do it but do not neglect your studies. You will have to say no to nights out at times and that’s okay. Sometimes you feel like it’s all or nothing at uni but it doesn’t have to be like that. So my advice is be organised.