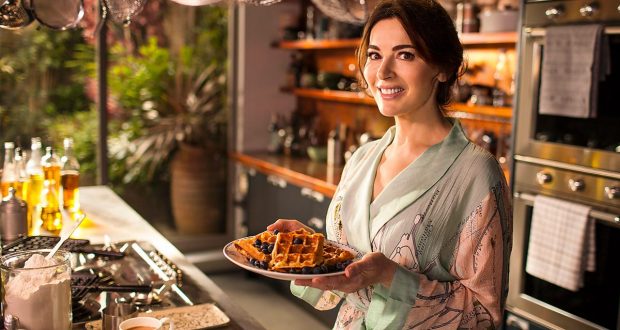 Written by Karan Ahluwalia on November 20 2017

Nigella Lawson has had various shows named after her over the years but her passion towards food has remained the same.“Life can be complicated; cooking doesn’t have to be” is the philosophy she carries through her show ‘At My Table’ (BBC2) every Monday at 8.30pm. The show features corresponding recipes from her latest cookbook with the same name.

Her effortless style and dreamy voice is the best part of her shows. For the audience she is not only a domestic goddess but a style icon. As she bites into sumptuous brownies dressed in a Venice map print silk robe and a loose chignon we cannot help but envy this woman and her joie de vivre.

Lawson has a tendency to convey to the audience the phase she is going through in her life with her recipes. They have progressed from mumsy family meals in her initial shows to indulgent feasts that served as fat-laden insulation from life to simple, breezy recipes that might require luxurious ingredients but not much effort. Showing the transition of her life from a working mother, to being in an abusive relationship, entering now the most peaceful stage of her life, looking healthier and more radiant than ever.

She has often said that poaching eggs is her chef’s Achilles heel, so when she first mentioned her Turkish eggs in the first episode I was gobsmacked. She then went on to pick Aleppo pepper from the chilli section of her pantry and then demonstrated her poaching process that didn’t leave the boiling water looking like albino mist. She cracked a fridge cold egg into a tea strainer to get rid of the runny part of the albumen, transferring the egg into a ramekin before it made the final journey into the boiling water.

Only someone like Lawson can master a recipe of Turkish eggs that require all kinds of globetrotting and pottering about the kitchen that would require some serious dishwashing afterwards. Only this woman can make eating A fried spiralised tangle of golden crunchy potatoes with her hands classy.

What the show is missing is her famous midnight walk-of-shame to the fridge. It was those post-credits scenes that made her so aspirational. Only she had the chutzpah to end each episode with a shot of her walking to the fridge in her silk robe to take a handful of leftovers, demurely stuff them in her mouth and disappear into the night with a satisfied smirk.

The reason I look forward to the rest of her series is not just the recipes but her effortless extravagance and the delicious sentences she utters. Such as her recipe for two squidgy brownies for a late night spot of dessert, and the uninhibited screeching she reenacted from Psycho as she stabbed into a large lamb joint just proves why she is a national treasure.