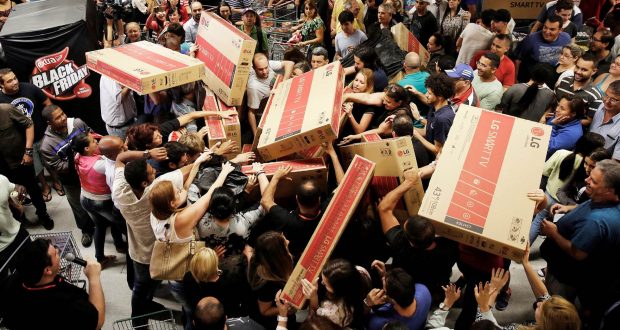 Why bother with Black Friday?

Written by Megan Flaherty on November 23 2017

Every year, you and all your friends vow to avoid town at all costs when Black Friday comes around. Everyone you know is moaning about the chaos and absurdity. So why is it still a thing?It turns out that Brits (and students) can’t say no to bargain, so we’ll see you on Friday for some pushing, shoving and elbowing despite the fact we’re just adding to the consumerist society that will eventually burn out the planet and destroy life as we know it. Enjoy your shopping trip.

Black Friday takes place the day after Thanksgiving yet it still manages to ruin the values of the holiday. We’re meant to be thankful for the things that we have already, not obsessed with plastic atrocities that will end up sat in landfill for hundreds of years. Surely everyone knows that by now. So, again why are we still crazy for it?

Greed, consumerism and the undesirable need for a good deal.

The need for a good deal is so intense it is worth repeating a hundred times over. Though, sadly, greed may be the overruling factor here. If we really were just after a good deal, charity shops on Eden Street would be jammed packed 24/7. But instead shoppers insist on giving away their hard-earned money to billion-pound companies who continue to avoid tax.

According to the IMRG (Interactive Media in Retail Group), over £7bn will be spent this weekend. That’s enough to put every homeless person in London into temporary accommodation over 10 times.

Asda, who originally brought Black Friday to the UK, has already boycotted the day because of the senseless mania that takes over shops and shopaholics alike.

It’s not like the cat fights you see on TV. Women aren’t pulling each other’s hair over a pair of pretty shoes. Violence seems to break out animalistic style between men, women, children and all those in between. Granted, this is mostly in the USA but the question must still be asked about when, and more importantly why, did this become an accepted and almost celebrated part of our society? There’s nothing clever or noble when bragging to your friends about how you grabbed a great deal for the latest iPhone, when forgetting to add in the part of the story where you drop-kicked someone out of the way first. It is loathsome, not at all something to be proud of and no one wants to hear it.

My heart goes out to those who have to work on this disgusting and dreaded day. The underpaid and overworked retail staff are the unsung heroes of Black Friday. It’s difficult to know how they have any hope left for humanity after witnessing first-hand the videos and snapchats we’ve all seen shared on Facebook.

It’s simple really, have some common sense and save yourself a punch in the face this Friday 24 by staying at home and doing your shopping online instead.