KU student talks about the recent controversies behind banning the niqab in the UK.

Behind the veil: The girl who who went to therapy because she wore a niqab

Written by River Reporter on October 12 2013 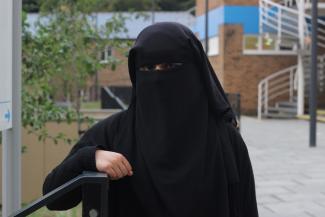 Dressed in black, with only her eyes visible, she leaves her home every morning to attend her lectures, preparing herself for the long journey ahead and the awkward stares.

Her name is Saima Kauser, a second-year primary education student at Kingston. Last year, she made the decision to wear the niqab, a cloth that covers her entire face except her eyes.

“It was an amazing feeling when I first wore the niqab”, says Saima. “I felt like I had a new identity and responsibility.”

However, the 20-year-old struggles to travel two hours from her home in East Ham to Kingston because of verbal abuse.

Wearing the niqab may look very mysterious and threatening to some people. Saima recalls a traumatic experience when she received verbal abuse on the bus from another passenger.

“The man on the bus was kicked off eventually, but I cried for the duration of my journey home,” she says. “He asked me why I bombed his country and lots of other things. Getting called a ninja has become frequent for me too.”

As a result, Saima attended therapy sessions in January after she started to fear how people would react towards her.

“I cannot bear to look at the faces of people as I constantly see hate,” she says. “I feel really nervous and anxious when travelling now but I am trying my best to get to grips on how things are. It feels like I am doing something wrong when I’m really not.”

The national debate about the niqab and whether it should be allowed in public places started after a Muslim woman refused to remove her niqab when standing in court.

The judge decided that the woman would have to uncover her face so that the jury could work out whether or not she was telling the truth.

However, she refused and only revealed her face to another woman.

Only a minority of Muslim women in the UK choose to wear the niqab. The most common type of Islamic clothing for women is the hijab, a head covering worn together with long dresses. Therefore, seeing a woman covering her face is not a common sight, and many people are not familiar with it.

In some Muslim countries, women wear the burqa, which covers the entire face including the eyes, which are covered with a very thin layer of fabric.

Islamic texts make it clear that women should cover up, but many scholars have differing views on whether wearing the niqab is compulsory.

Home Office minister Jeremy Browne claimed that he believed in freedom of religious expression, but is against women having to wear the niqab. He said that young girls should not be forced to wear religious clothing and should be allowed to make their own choices.

Prime Minister David Cameron said Britain would not follow other European countries in banning the niqab. But certain institutions such as schools and colleges can continue to set their own rules if they wish.

Saima, whose parents are originally from Pakistan, says she has no problem with showing her face for security purposes when entering exams, train stations, airports and getting on the bus.

She feels that she has the freedom to wear what she wants in public and choose when it is an appropriate time to take it off.

But what has helped her most is the respect she gets from her fellow peers and lecturers at Kingston University. She says she has faced no problems during her time studying here and feels that she has more confidence because of the good people around her.

“There are lots of great people on my course who treat me just like everyone else,” she says. “My lecturers are amazing and so respectful. I haven’t felt any different from other students on my teaching course.

“I also recently got a chance to be a form rep for my group which wearing a niqab I would not have considered possible.

“I just wish people could get over how a minority of women choose to dress and focus on much bigger issues such as tackling extremism and tackling those individuals who cause genuine Muslims like myself to constantly be in fear of more backlash over things we do not consider to be right.”

Omar Malik, president of the Kingston Islamic Society, condemns the idea that a Muslim woman is oppressed or “forced” on what she should wear.

“In the society we live in, a woman who hardly wears anything has become a norm,” Omar Malik says. “So what’s wrong with a woman who wants to cover up? It should not be a problem. Islam encourages women to stay modest, it’s not by force.”

Saad Choudhry, also a member of the Islamic society says: “What if the hijab is the next issue in the UK and it gets banned? We should have the right to defend our religion. And yes, when it is important to reveal your face for ID, then it should not be a problem.”

Before deciding to wear the niqab, Saima used to enjoy straightening her hair and shopping for the latest trends in high street shops. But when she started to practise her faith, she became more aware of how modest she would need to look as a Muslim woman.

Saima used to wear clothes which she considered modest because they covered her body, but she didn’t realise that they were so tight-fitting.

“I started questioning myself in regards to why I dressed the way I did and what benefit it brought me,” she says.

This decision has not made her feel less feminine. It has made her feel more spiritual and content with her life. She follows the religion of Islam, where women keep their modesty to protect themselves. But the choice to make that decision is down to each individual woman.

“Where I live in East Ham, it was normal to see women covering their face, and having close friends who wore the niqab really helped me,” she says. “I remember being encouraged and constantly helped by a friend called Khadija.

“Seeing how content she was with life really made me want to feel that spiritually close to my Creator too.”

It brought along a lot of changes in her as she felt she had to be more cautious of what she said to people and how she behaved because she was representing her religion.

She says: “To help others understand Islam is to show them the best qualities of it – for example wishing for someone what you wish for yourself.”