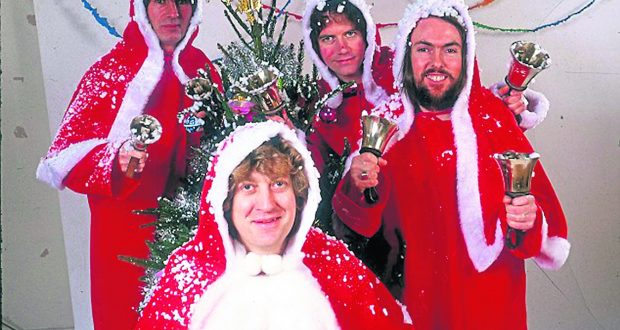 The Christmas number one used to be one of the highlights of the season where people would wait on the edge of their seat to know who would snag it but then, like the Grinch stole Christmas, the X Factor stole the whole show.

But with the X factor losing its shine to the public, is it now time for someone else besides bleeding heart charity bands and the flavour of the month winner to take the top spot this Christmas?

Heart presenter Kat Shoob thinks that the X Factor will keep a tight grip on that coveted spot regardless of its waning popularity.

The radio presenter said: “It’s always definitely high in the running for it, unless a wacky novelty song comes along near the time.

“All rules go out the window for songs at Christmas time.”

Since first airing 13 years ago X Factor has seen six of its winners get to the UK Christmas number one.

Shayne Ward started the tradition in 2005 after winning the second series of X Factor with his single That’s my Goal followed by Leona Lewis, Leon Jackson and Alexandra Burke in 2006, 2007 and 2008 respectively.

In 2009 Jon and Tracy Morter decided it was time to put a stop to the Scrooge-like Simon Cowell’s monopoly over the number one.

The two of them launched a Facebook campaign to try to prevent the X Factor from topping the charts for the fourth time in a row.

They campaigned to get a rock song to the number one spot in protest over the by then predictable chart result.

Rock band Rage Against the Machine beat X Factor’s sixth season winner Joe McElderry’s The Climb by 50,000 copies with their single Killing in the name.

But this did not knock X Factor out of the game for long and it came back with a vengeance the next year.

The show won back its Christmas crown in 2010 with Matt Cardle’s ‘When we Collide’ but lost it again for the following two years to charity number ones.

Winners Sam Bailey and Ben Haenow reclaimed the title in 2013 and 2014 but X Factor has not managed another hit since then.

So how has the mighty singing competition fallen? Is it because of their declining viewing figures?

The launch of the 14th season this year drew in their lowest figures since they first launched with a peak of six million viewers.

It is a significant drop from the final on December 12 2010 that had an average of 17.2 million viewers.

It seems as though people have finally had their fill of up and coming stars and maybe it is time for established celebrities to steal that top spot.

Many popular artists have released Christmas albums this year – is it possible one of them could be the next Michael Bublé or Mariah Carey?

Kat said: “The Christmas number one is still very important for all popstars.”

Gwen Stefani released her festive album with a bit of a pop twist entitled You make it feel like Christmas in October this year and it has reached number three on the iTunes top 100 Christmas chart.

Even Sia has tried her hand at a little Christmas cheer with her own album debuting on November 17 featuring a mix of new songs such as Santa is coming for us and Snowman.

Kat reckons if one of the One Direction boys, who are former X Factor contestants, released a Christmas song then their loyal fans would most likely get it to number one.

“Anything with jingle bells on is a winner,” Kat said. “I remember Little Mix popped some jingle bells on a version of one of their songs that had already been out a couple of years ago and that was really popular.”

Despite never having a Christmas number one, queen of Christmas Mariah Carey does not look like she’ll give up her crown so easily as she is going on her All I want for Christmas tour and has plans to release a movie of the same name.

Mariah’s All I want for Christmas is one of the most requested songs at Heart radio during the festive season on par with Wham’s classic hit Last Christmas.

Though both of these classic Christmas hits are clearly well loved they could not crush their competitors in the battle for number one.

All I want for Christmas debuted in 1994 and never made it higher than number two, being beaten by East 17’s Stay Another Day.

The Official Charts Company said that Last Christmas is the biggest selling single not to make Christmas number one.

Though Wham were one of the most popular bands in the early 80s, ‘Last Christmas’ had no chance against the charity hit Do They Know It’s Christmas? by Band Aid.

But without the X-Factor stealing the number one, will we know it’s Christmas?