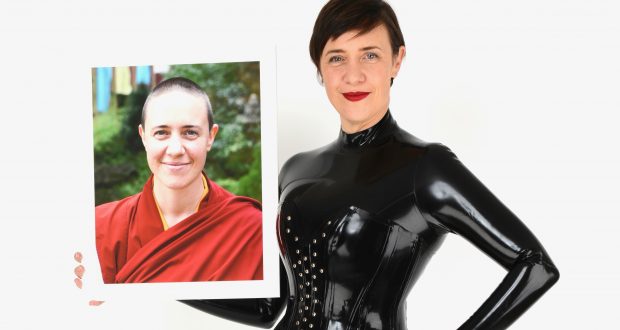 From artist to nun to latex lover and Kingston University student, the life of Damcho Dyson is anything but usual. It is like the 45-year-old Australian artist has reinvented herself twice and lived three lives.

At 29-years-old Damcho Dyson, then a successful artist named Michelle Tonkin, erased all traces of her old life and left Melbourne to devote herself to Buddhism in a monastery outside Montpellier in France.

Family, friends, home, work, hair, sexuality, even name and identity were left behind for almost ten years. Now she has swapped the nun robe with latex and instead of devoting her life to Buddhism, she is devoting it to the art of being unbound.

Damcho met The River at Kingston University’s Knights Park campus, where she has recently enrolled to do her PhD. Her journey from artist to nun to Kingston student, from Australia via France to the UK has not been an obvious one. 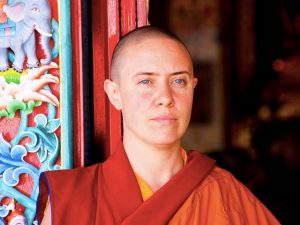 “I went to art school in Australia in the 90s. Simultaneously I was studying Tibetan Buddhism,” Damcho says in her charming, Australian accent. “Through studying mystical traditions I had this natural thing pop up in my heart, like ‘oh I want to be devoted’ and I reasoned with it. I got all my affairs in order. I had to pay off debt, gave away things that had been given to me, and sold things I had bought,” she says.

With her possessions down to what fitted in a simple suitcase, Michelle Tonkin ordinated in Nepal, was given the spiritual name Damcho Dyson, and prepared for life as a nun. “Everything was in order, like preparing for death. It was a good process.”

In the years that followed, Damcho woke up before the sun and worked 14 hour days in the monastery. “It was intense,” she recalls. By the end of 2010, after years of hard work, in celibacy and wearing a loosely fitted robe every day, Damcho started to struggle with her body and her connection with it. She felt burned out and disconnected. She decided to intensify her nun practice and headed to India to be fully ordinated. That’s when it all changed.

“I had become so wound up in being a nun. Every day I was overriding my physic and that had an accumulative effect. In India, I had a health treatment where they massaged me, and my mind and body sort of reconnected and it was like reconnecting an awareness with my form,” Damcho explains and describes it as an ‘awakening’.

At the same time, Damcho realised her body carried a lot of history. In her early 20s, she had an abortion and turned to Buddhism to deal with the emotional aftermath.“I thought I had to take this religious route to purify that,” she says. After the awakening in India, Damcho decided to forgive her past, leave the ‘nun life’ and enter a new one. 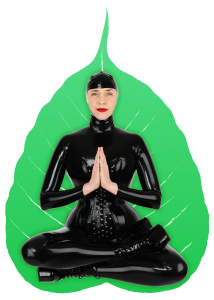 Damcho longed to return to a mystical or meditative practice with something that still excited her. “That’s what latex became. It became exciting,” she says. (Photo: Graham Price)

The former nun, returned to Australia realising everything had changed. “I felt really shy about being a woman again because I felt I had become almost androgynous as a nun. So I started wearing loose, baggy black tracksuits. My sister took me shopping for mascara a few weeks later, I felt so regal. It was very graduate. First of all connecting with my body again and then connecting with being a woman. And then after some time, connecting with my sensuality and sexuality,” she explains.

With no savings and a gaping hole on her CV, Damcho needed a job. “I did loads of work in the monastery and learned skills, but when I said to someone I was a nun for ten years, their like ‘what transferable skills have you got?’,” she says laughing.

That’s what led her to London where a friend offered her work. In London, the former nun discovered her love for latex. “About a year and a half ago I recovered from being a nun. A friend took me to the London Alternative Market [a monthly fetish shopping event]. She had an idea I might enjoy wearing latex for a reason,” Damcho says laughing.

After “unbecoming a nun”, Damcho longed to return to a mystical or meditative practice and immediately recognised the odd similarities between the ritual of monastic robes and latex fetish wear. “I thought: ‘why not, I’ll try a piece of latex on’.  The moment I did it, it was the first item that reminded me of being in the monastic robes again. Even though it looks completely different, there was something about the ceremonially of it, the way in which it encloses you with an identity.”

Latex, to many, is associated with sexual components. After her “unbecoming a nun” Damcho re-explored sexuality and latex enhanced that. Still,  the sensuality of latex is more important than sexuality to the artist.

“It [latex] made me feel very at home in the female form, which of course as a nun I never did. It has this empowering effect and is very supportive, like a warm hug or something.” She bought some latex pieces and started playing with it. “I just thought ‘wow, this is the first time I’ve put on something and it inherits the way I feel.’” 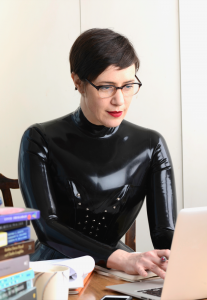 Damcho is now doing her PhD on latex at KU. (Photo: Graham Price)

Damcho’s PhD compares the rituals of wearing monastic robes and wearing latex as part of a fetish scene. Her PhD, called “Bodhi Unbound”, aims to connect femininity and ritual, boundaries and the different masks we wear. Monasticism and latex see as opposites and the outfits are certainly a contrast but to Damcho latex is about making sense of embodiment.

Although Damcho has swapped the robe with tight-fitting latex and the monastery with Kingston University, she holds no regrets for her life as a nun. Damcho is still a Buddhist and implies what the nun life taught her into her new latex loving life.

She does not know what the future holds but wish to teach and continue her art practice. As we have spoken about her different lives, I ask what the most important thing she has learnt from her tree lives are. She thinks for a brief moment and says: “My ‘after nun period’ was about challenging the things I learned as a nun. I think if we can integrate simply presets of being a good human being into everything we do, whatever it is, I think that is significant. The world needs it. It doesn’t need monks and nuns to be hidden behind bars, it needs good human beings integrated into society.” 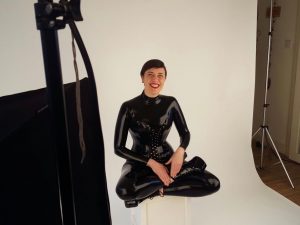 Damcho aims to live by Tibetan Buddhist monk, Mattieu Richard’s, words. “He said to ‘be good, do good’. Don’t put yourself above others and be genuinely nice to whoever the person is in front of you.” (Photo: Illusion Films)