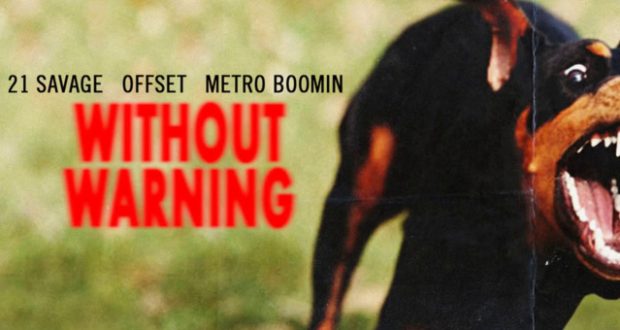 21 Savage, Offset and Metro Boomin team up as a trio on Without Warning

Happy Halloween: 21 Savage and Offset collaborate on Without Warning

Written by Chanel Buituron on October 31 2017

A surprise album released on October 31 sees some of this year’s most successful artists — the iconic 21 Savage and Migos’ Offset — with super-producer Metro Boomin.

The album, which was released on Halloween, has different sound effects throughout — the mixtape has allusions, wolves howling, dogs barking and jump scares (on songs including Nightmare). Releasing the album on Halloween was a good choice and the album gives Michael Jackson thriller vibes, in a trap style.

The trio worked perfectly on the album: Metro’s beats were unique and add to the value of it being released on Halloween with the spooky feel some of the songs provide. Offset is one of the most outstanding rappers in 2017 and 21 Savage has been rising among artists since his collab with Future and the release of his album Issa back in July this year.

Initially, when hearing about 21 Savage and Offsets collab on this album, it seemed very odd to pair the rappers together, but it works really well. It was a good business decision as Offset is a member of one of the biggest groups in hip-hop right now, Metro Boomin is highly demanded and the hottest producer in the game and 21 savage broke Apple Music and Billboard records being the fastest song to go to number one on the charts.

Every song is unique and different as they do not all sound the same, which is why the album is a hidden gem.

Metro never fails to produce some fresh and iconic beats. The album is by far one of his best works, even though he has made some unbelievable beats with artists like Travis Scott, Gucci Mane, NAV, Future and both 21 Savage and Offset.

Without Warning deserves a strong 5/5. The trio works really well and has the style of trap music but something completely new. The choice of releasing it on Halloween and giving it that Halloween feel adds to the overall value of the album as there are catchy beats, mega bass and some strong verses on this album.

Best songs on the album: Rap saved me Ft. Quavo, My choppa hates ****** and disrespectful