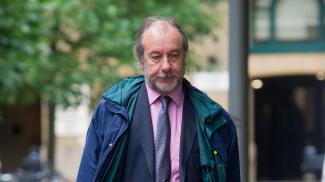 Disgraced former Kingston councillor Derek Osbourne, has been sentenced to two years in prison at Southwark Crown Court for possessing and distributing indecent images of children.

Osbourne sat impassively in the dock, wearing a blue suit and tie with a poppy in his lapel, while Judge Alistair McCreath handed out the sentence.

Judge McCreath told Osbourne: “Those who by choice occupy a position of authority in public life have a duty to the public to behave in the highest of standards, and you did not.

"I acknowledge and recognise the effect on your family of what you have done, and the effect on them, innocent as they are, of the sentence I must impose on you."

The ex-Lib Dem leader was arrested at his home in Burlington Road, New Malden, in June and the court heard how he admitted the offences from the outset.

Osbourne’s defence counsel asked the court to take into account his plea, his age, his previous character and the wider implications on his wife and two children but the judge dismissed this,saying Osbourne was the only one to blame.

Osbourne, who had not displayed any emotion during the sentencing, was led away to the cells.