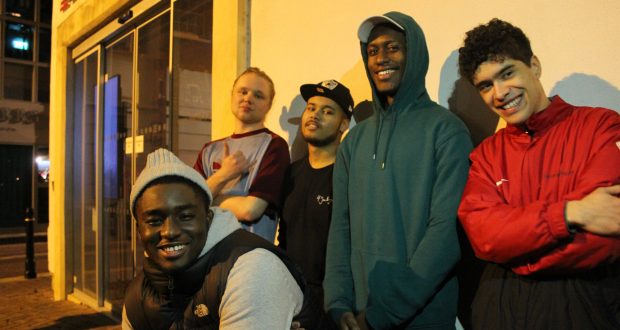 Visitors got the chance to see Coalescent, consisting of members Niall Sheerin and Drew Dutoit, perform alongside other rappers Dan King and Hugh Williams.

“The energy was exactly where it needed to be and the crowd was hyping us up even more. Bacchus killed it. Best night of 2018 so far,” said Dutoit.

The duo has performed all over the country, from their hometown in Kent to Manchester and even at several gigs in Kingston at The Fighting Cocks. Sheerin and Dutoit have been together since they were 14 and have been making music since they met in secondary school. They write and produce all of their music themselves and have had their songs featured on BBC Radio Kent and Lush Radio.

“On stage tonight, it was just an amazing feeling, having the people receive our music and seeing them really get into it, it’s amazing,” said Sheerin.

Dutoit said: “I think one of our best shows is the one we had here in Kingston at the Fighting Cocks, it was another crowd where they just had that energy. Sometimes crowds don’t have that much energy and you have to give them the energy. Just like the crowd we had tonight, it was great.

“In Kingston, there’s so much more going on especially for underground artists like us and it’s just so close to London. That reminds me we have done a few shows in central London, but we need to do more this year. In 2018 you can expect a lot more from us.”

The event was hosted by DJ collective Grand Unified Themes (GUT) and this was the first time they have managed to get live performers to perform at Perculated sounds.

DJ and founding member of GUT Carl Orza performs every month at the event.

“We started playing music about a year ago. We just wanted to play good music for people. As long as people are having a good night, that’s all that matters,” said Orza. Orza has been DJing at events across the country since he was 15 and is also the current 8th Wonder Beatbox Battle champion in the UK.

“I first met Coalescent when they opened for a band called Sounds of Pluto, who I do the intermissions for where I DJ and Beatbox and they were so sick. When I had the opportunity I just had to get them involved with what we do here,” said Orza.