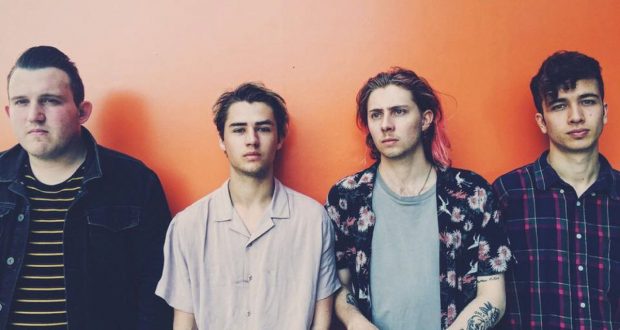 Dead! The band who's DIY attitude is a favourite for the fans Photo credit: Dead!

Dead!’s Sam Matlock on being a DIY band and The Golden Age of Not Even Trying

Comprised of frontman Alex Mountford, 23, guitarist brothers Sam, 24, and Louis Matlock, 21, and bassist Sam Chappell, 24, Dead! are armed with a wealth of enthusiasm, talent and DIY skills. The band have already toured Europe, moved into a house in London, released their own music, made their own videos and amassed a large following, all before releasing their debut album.

“If you’re looking for something really real, really honest, really British and really simple rock, good, nostalgic and straight to the point then that’s when I’d check out dead!”

That’s how guitarist Sam Matlock described his band, a quartet who decided to take matters into their own hands when they saw the music scene on their hometown, the Isle of Wight, disappearing around them. With the decline in small music venues, the rise of digital and a passion for music, Dead! was formed.

“The DIY thing at the start was brilliant, we were a small band, we didn’t really know what we were doing, we were working at it but it was just a bit of fun then. There was no time to just sit on your arse and expect people to offer you things. We got cracking, we got working and we just done it ourselves,” said Matlock.

Now they’ve been signed to Infectious music/BMG records in the UK and Rise Records in the US, the DIY attitude of dead! is thankfully not gone, but now focused in other, more creative, directions. “We’re just control freaks” he admitted. “Everyone has their little problems, you know, and I think ours is a little of the OCD, control freak type of thing. With what we do, it’s kind of impossible for us not to be DIY in some respects.”

Even now, they still handle and design all their own merch, and bassist Chappell is the one who designed the packaging for their debut album, The Golden Age of Not Even Trying.

Unlike many albums nowadays, it was tracked live, a technique used by bands like The Who, The Rolling Stones and The Zutons that allows the raw energy of the performance, emotion, and personality of each of the members to come through.

The sense of nostalgia the band bring is a theme within everything they do. Sam said that they often encourage their fans to flyer the cities they will be performing in. “People really like being given a flyer by a band member or a fan of that music who’s really excited about sharing them. I think there’s something genuine about that connection, rather than just saying like my page on Facebook or getting a notification. We’re always going to back that”

“I think there’s a time when flyering is going to be completely gone, I think that won’t be too far away to be honest and I don’t blame them. If it stops working, it stops working. Matlock added. “I listen to bands because I used to be given flyers when I was wandering around, so I like to think people are the same.”

It has certainly worked so far, dead! have over 20,000 weekly listeners on Spotify and that number is growing with each day. When asked what he was most excited for with the release of the album, Matlock not only talked about having a brand out there, but about giving back to the fans that have supported them for so long. “I think we’re all a little bit embarrassed that people love us, they come to our gigs, we sell out shows but they can only listen to six of our tracks on their phone. It feels a bit rude, so for them to finally have another 12, it feels like we owe them that much.

And it’s just about getting it out there. It was meant to be released last June, that was the plan. We’ve done this release, made it as good as we can and we’re looking forward to finally having a body of work out there so when people check us out, they can actually go ‘oh this is what this sounds like, here’s a coherent 12 tracks.’”

So, what are Matlock’s favourite songs off the album? Well, they’re all his babies so it’s hard for him to choose, but the first and the last are the two he’d pick. The Boys, The Boys represents the vibe he’s going for. “You know there’s all that squad goals thing people do these days, I like that our version of that is The Boys, The Boys. You know, the fucking lads, the girls can be the lads, the boys can be the lads, everyone’s a lad.” The final song of the album, Youth Screams and Fades is another of his favourites. “It’s an entire song about growing pains, so for a 24-year-old releasing a record, your experiences are essentially growing pains up till now.”