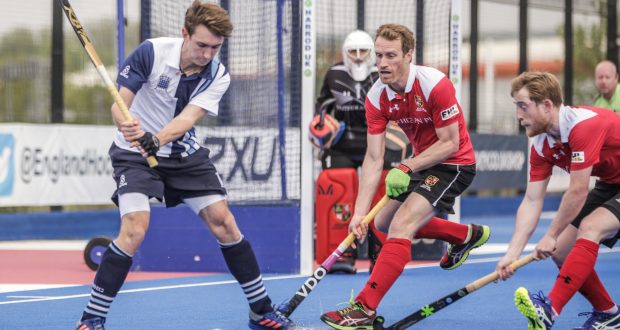 Written by Synne Johnsson on January 31 2018

When Kingston student Will Calnan missed out on selection after his first trial for Surrey at the age of 12, his mother e-mailed the coaches saying they had to give him another try.

Thankfully they did – and her confidence was proven right when he later went on to become one of England’s best junior hockey players.

“I reckon if she didn’t send that e-mail I could have slipped through the net,” said Calnan, who has now become a professional hockey player.

The business management student earned a full-time contract with England after a very good season for the England under-21s.

Although he was confident he would get on the team since he thought he had had a good year and played well during trials, he did not expect to get a full-time deal.

“I’m very happy and I definitely feel a slight sense of accomplishment,” Calnan said. “But then I know I have a lot more to do. Now I have opened the door and there are so many more things I have to work towards.”

The 21-year-old does not remember the first time he picked up a hockey stick, but he believes it was when he was around the age of seven at school where he was introduced to hockey alongside a range of other sports.

Calnan never played hockey or any other sport to become a professional, he simply played because he loved sport.

“What I like about hockey is the control aspect. You’ve got a stick and it’s about how you can control the ball. It’s really fast, very technical, a lot of intricacies which I really enjoy.”

Calnan has played for England for six years through the different age groups: under-16s,  under-18s and under-21s, and both his little sister and brother are currently playing for the England juniors.

But he has not become this good overnight and he does not deny that behind the success lies hard work.

“I can’t even tell you how many hours I’ve put out on the hockey pitch. It’s full on, year round,” the England forward said. “The longest break I have had was when I broke my foot and was out for six weeks. You never get six weeks without a training session.”

Calnan has spent more time playing hockey than the average student spends at lectures, so naturally he has not lived the university life that many other students have.

He is taking his second year over two years to have time for it all and hopes to do the same with his third year, but he is determined to finish his degree.

“It’s going to be difficult, but I definitely will, it’s one of my priorities as well, to get a good degree,” he said. “The uni have been very supportive trying to work it around my hockey and I would not have been able to do it if the uni weren’t as supportive.”

“It’s kind of like a full time job, so five training sessions a week, three gym sessions a week and then maybe a bit more of that in my own time, then two club sessions as well,” he said. “The difference from before is that the under-21s is just a couple of times a month. Now it’s hands on every week, so I’m going to be spending more time at training for England that I will be at uni.”

He thinks his competitiveness is one of the reasons why he has come as far as he has.

“I’m very competitive. I don’t like losing, not even generally losing a match, but losing a race, a run to the ball, everything is a competition. When I play I’m quite aggressive and gritty as well. I do what it takes to try and win.”

Hampstead & Westminster men’s coach and England under-21 assistant coach, Kwan Browne, said Calnan has been consistently good throughout 2017 and topped off his performance when he became the top goal scorer at the under-21 euros where he scored 11 goals in five games.

“Will is an exciting player to watch as he has the ability to eliminate defenders with his speed and skill. I can’t wait to see Will’s development as he is one of the best juniors in the world,” Browne said.

Great Britain and England men’s head coach, Bobby Crutchley, said he is looking forward to being involved in Calnan’s development on the pitch.

“Will is an exciting prospect who has shown to be an effective junior international. His physical and technical abilities mean he has the raw ingredients to become a successful senior international,” he said.

He points out that Calnan’s commitment to continue to learn and whether he is willing to embrace the lifestyle of a full-time athlete is what will determine if he will make it on the team or not, something Calnan clearly is motivated for.

A closer goal in the lead up to the Tokyo Olympics is the Commonwealth games this April.

“I don’t know if it’s too soon for me to be picked, but hopefully not, I’m going to try to be picked. I think I can,” he said.