KU students side by side with Philippines 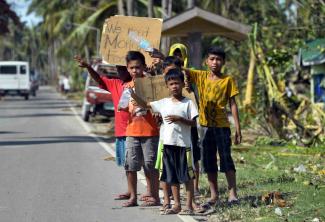 KU students are joining forces to help the Philippines two weeks after Typhoon Haiyan hit the country leaving more than one million people without a home.

The typhoon, one of the most powerful storm recorded on land, destroyed towns and lives, with one million displaced and thousands of people dead with the number likely to be higher over the next days.

Dr Norman Cheung, senior lecturer of Geology and Environment at Kingston University, is an expert in tropical storms and disaster management.

In an interview with Channel 4 news he said: “This is the highest wind speed ever seen when a storm makes landfall. When it is over the open ocean that is another story."

"This storm is so severe, and they are in a low-lying area. The impact will be huge and the damage could be huge,” he said.

Ashereen Kanesan, international relations student at KU, decided to take immediate action to help the Philippines because of the impact of experiencing the 2004 tsunami in Sri Lanka had on her.

“Seeing how the disaster destroyed so many lives and knowing that they didn’t get the help they needed was really heartbreaking,” Kanesan said.

She is organising a campaign called ‘Help the Philippines’ to send food and clothes to the country where students are asked to bring dry food, such as energy bars, biscuits and tin cans, as well as clothes.

The Emergency Planning Society and Oriental Society also organised a bake sale to raise money that will then be sent off to those in need.

Sofie Allen, Emergency Planning Society President, feels good to be able to help in such a horrific natural disaster.  “The Filipino community seems very appreciative of what we are doing which makes us feel great as society,” Allen said.

Angela Gomez, first year Filipino student at Kingston University, is grateful for all the help and support from her friends at Kingston.

A sense of community

“We are a very international community at university and if this happens to any other country I like to think that we will support just as much, no matter how big or small the issue is,” Gomez said.

Gomez said it was hard to be away from home at this time because she was not able to help her people in the Philippines like she normally does when natural disasters hit the country. “Even though you are not directly affected by it, your people are affected by it and if you have the national pride I do, you will also feel affected.”

Even though the typhoon killed many, Gomez believes the natural disaster brought a sense of community to the Philippines and to the world.

“In this disaster there is so much love that comes in, everyone is helping, you see your friends and people from all walks of life volunteering,” she said.

The events are taking place at Penryhn Road from 11am-4pm between November 20 and 29.