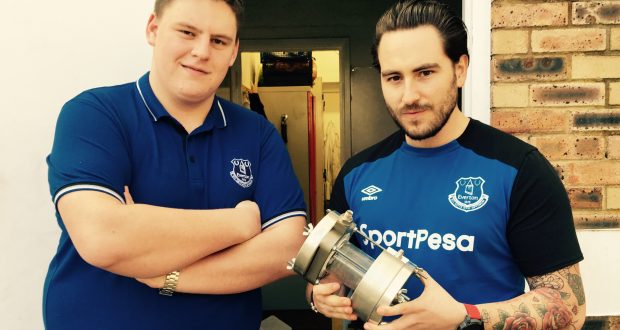 The engine is the first in the world with a glass combustion chamber Photo: Jack-James Marlow

KU team aims for the stars with a glass rocket engine

Written by Torjus Roberg on February 19 2018

A KU lecturer has invented a revolutionary rocket engine made of glass and 3D-printed plastic that has caught the interest of international businesses.

Dr. Jack-James Marlow, 29, has built a new type of engine that can be used for any type of rocket which slashes production costs, making it a much better alternative to engines currently on the market.

“The technology has far-reaching benefits. Companies have contacted Kingston University and expressed interest,” said Marlow, who completed his Ph.D. in January. “An interested company is aeronautical giant Airbus.

“They are very keen on this technology going forward and that is possibly one of my future prospects.”

The engine would make space much more accessible because it would slash costs compared to the engines that are now being used. The Falcon Heavy rocket launched on February 6 by Elon Musk’s SpaceX cost $90m alone.

Marlow avoided the huge costs of building a rocket engine by replacing certain parts with 3D-printed plastic and a glass combustion chamber, making it the first rocket engine in the world to be made from glass.

NASA attempted and failed to develop the technology Marlow created.

Marlow said: “Back in 2013 everyone said ‘this will not work, it has got to have some downsides’, but I still put it forward. NASA put $20m into looking into this and I looked into it with less than a £30,000 budget and got promising results.”

The engine can be applied to any type of rocket, from satellites to missiles and large-scale rockets such as the SpaceX model, and is roughly double the size of a normal engine.

Marlow, who now lectures at Roehampton Vale, plans to start a company alongside his former Ph.D. supervisor, Dr. Adam Baker, to develop the design.

He also said that without the help and support of Kingston University and his assistant Talbot Jinks, he would not have been able to pursue his ideas.

Marlow said: “The University was very supportive, they gave me the funds to construct a rocket lab so now we are the only UK University that has a dedicated rocket lab. Some of the funding we got from the UK Space Agency, so we won a big grant for this engine. They gave us £100,000 to develop this.

“Connor was one of the few students who had the motivation to do this. He was a good hard-working engineer and he really applies himself.”

Talbot Jinks has been working on the project alongside his own course for a year and a half and sent most of last summer doing an internship for the University to further improve the engine model.

Talbot Jinks said: “It was just a really good opportunity. There is nowhere else in the UK where someone who has only been to University for less than two years can get a chance to work on something like this. not only did it put into practice what I have learnt but it was also a massive experience that I can then use later on especially in terms of job prospects.”