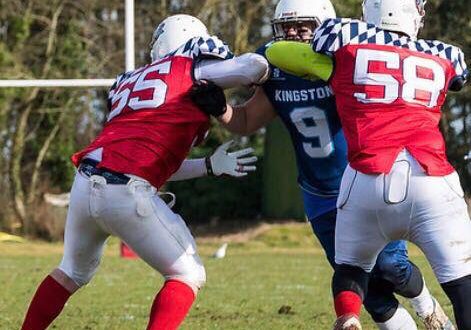 Kingston University’s American Football team have earned a league title after losing only one game all season.

The Cougars secured the trophy after a dominant 25-7 away victory against Sussex in their final game of the season.

This season’s president and defensive captain, 19-year-old Hamish Mackinnon, is the Cougars youngest ever captain. He said to The River: “We knew at the start of the season that our team was strong.

“Our confidence grew game by game and we started to become a really dominant and cohesive unit.

“At the start of the season we had a few growing pains and struggled to find our proper level but this eventually came.” 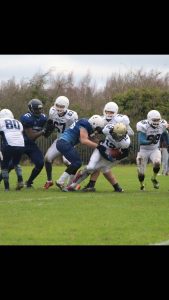 Defensive-end Mackinnon also hailed Cougars star running-back Gabriel Quartey, adding that the team would not be holding the trophy if he was not in the side. He also claimed that opposition players usually required three defenders to mark him.

The Cougars won seven out of their eight games, with their only defeat of the season coming just after the Christmas break against Brunel University, agonisingly losing 9-8.

Despite the disappointing defeat, Mackinnon said this game was his personal highlight of the season: “At the time I felt down and disappointed to lose our unbeaten record but coming away from that game I knew the team has left everything on the field,” he said.

“Following that loss we then went on to outscore the next three teams 103-25 so it was a much needed wake up call for us.

“Overall I am pleased with the teams season but I am also equally proud of my own performance, I only started the sport a year ago and I have had a good season, I have been lighting up the stats sheet in defence and have racked up double digits in the amount of tackles.” 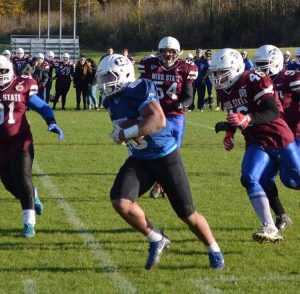 The season doesn’t stop there for The Cougars either, they are still in the National Championships, which is the cup competition including current Premiership teams.

Their high position in the league means they have earned a home tie, which Josh Oakley said was a relief as they don’t have to travel a long distance to Cardiff or Plymouth.

“I love the physicality of the game but it is also mentally challenging. It is like a game of physical chess,” said 21-year-old line-backer Oakley.

“It is nice to win the division but the season is not offer yet as we still have the national championship to play in.”
Oakley and Mackinnon also added their ambitions for next season in the Premiership. They believe it will be more of a challenge as they will be facing the best teams in the country week in week out but are relishing the prospect.

They aim to have a solid season by finishing midtable and would be anything more than that as they are expecting to lose some key players from this year.