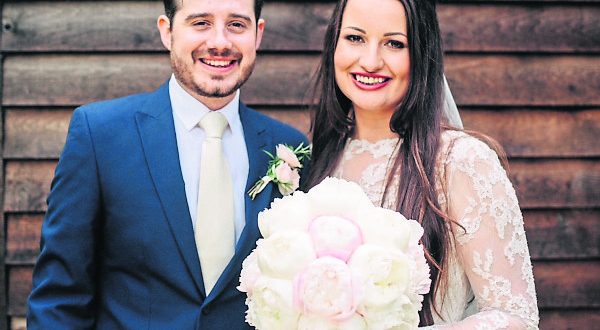 Former KU students got married after finding love on campus

From the confines of the KU corridors, the cougar chaos parties at halls and the late-night study sessions at Penrhyn Road library, love is all around us at Kingston University.

One fifth of British students meet the love of their life on Campus according to the One Day University Love League which surveyed over 2,000 UK graduates. The study revealed that psychology students (87 per cent) were most likely to fall in love with somebody on their course, with tourism students at 37 per cent and business management students at 27 per cent.

Finding love at university seems incredibly normal, even for the royals. The Duke and Duchess of Cambridge, ‘Kate and Wills’, fell in love when they met at the University of St Andrews in Scotland. They got married in April 2011 and have since had children, Prince George, four-years-old, Princess Charlotte, two-years-old, and are expecting another royal baby later this year.

Dr Penke, a relationship specialist, says: “Students are fortunate enough that they are surrounded by many potential partners, who on top of that share their educational background and the interest of their study subject, both factors that facilitate a relationship.”

Marija Frewin, 29, a KU journalism graduate and Mike Frewin, 29, a KU geography graduate, were introduced in 2010 by a mutual friend whilst studying at Kingston University, and have been together for the last eight years.

Marija, who met Mike for the first time in 2010, said: “I did journalism with Mike’s room mate who he lived with for the first three years, but I didn’t meet Mike until the very last year of university. I had been working on the River and I was at the Kingston Mill with The River team. Mike had just come down to the pub and that’s how we met.

“I had done a long feature in The River that week which he had read and there was a photo of me in it so I think he knew who I was from reading that feature. He just started talking to me and we really hit it off.

“At first I didn’t think he was my type. I thought he was a bit preppy and I don’t really go for the preppy kind of boy.”

Marija, who now works in advertising, moved back home to Oxford after finishing at Kingston to study law for a year and Mike moved to Stratford where he secured his first graduate job.

They continued a long-distance relationship for a year until Marija moved to London with Mike in 2011, who now works as a business analyst.

In 2014, Mike proposed to Marija whilst on a romantic cruise around the Caribbean.

“I had sort of given up on the hope that he was going to propose,” Marija confessed.

“He had said to me before we had gone away ‘I’m not going to propose just to warn you’ and I said ‘that’s fine I don’t expect you to’ just because we were going on this big holiday. So, I had put it to the back of my mind: when he actually did propose I couldn’t believe it.”

Marija is quite an active sleeper at night. Before the cruise, Mike staged that she had knocked over the jewellery stand on her bedside table so that he could get hold of one of the rings to find out her ring size without her noticing.

She added: “I truly believed that I’d knocked all my jewellery off in my sleep, but that’s how he had got my ring size. He put it back under the bed when I got home so it looked like I had just misplaced it.”

The Frewin’s have now settled down in Oxford with their four-month-old baby Theo, ready to start their life as a family.

A study carried out by dating website Match.com has found that the average age for Brits meet their life-long partner is 27-years-old.

It also found that, on average, women find ‘the one’ at 25, while for men it is slightly older at 28-years-old. 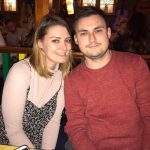 Lauren Rellis, 27, and Dan blows, 31, both graduated from journalism at KU in 2011, and have been together for the last six years.

The couple, who got engaged in September 2017, first met in a new writing class in first year but didn’t speak again until third year when they did a work placement at Haymarket Media Group together.

Rellis, a senior content editor from London, said: “I remember we did one of those awful ice breakers in our news writing class in first year. He said that he had completely made up that he was allergic to kiwi and I thought that was ridiculous.

“I laughed out loud and no one made any sound and then we never spoke again for a whole year after that.”

Rellis and Blows started officially dating in May 2011.

The couple got engaged in Sardinia last September though it wasn’t the proposal that Blows, a media and communications officer for Think Tank, had planned.

Rellis said: “We were supposed to go to a really lovely national park in Sardinia called Porto Conte. We got on our bus with Porto Conte written on the front. The bus drove for an hour and terminated outside Hotel Porto Conte.

[The hotel] was in the middle of nowhere, on the motorway and there wasn’t a bus back for five hours. So, we walked up an Italian motorway until we found one remote hotel which took pity on us and took us in for the day. Luckily, they had a beach and a lake out the back so he had to improvise and do it on a random beach at the back of a hotel, with an Italian man in speedos who was doing some exercise in the background.”

The couple have set a date for their wedding in November 2018.

Perhaps the love of your life is waiting to be found at KU. Send us a brief description of you and your crush to kingstoncrush@gmail.com for the chance to be featured on our website. You never know, it could be love at first sight!