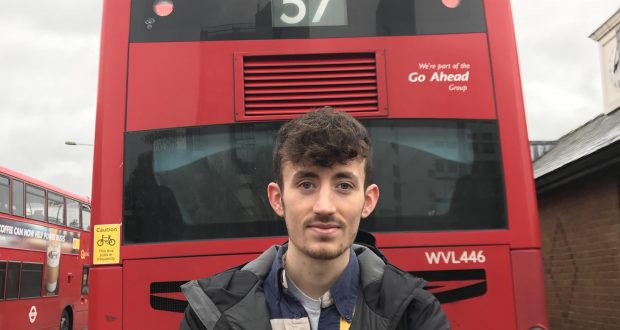 Benham spent the one-hour bus ride trying to navigate the double-decker bus all the way back to Kingston. Photo: Sofie Løchen Smedsrud

Written by Sofie Smedsrud on November 22 2017

A KU student had to intervene to calm down abusive bus passengers and had to guide the bus driver whilst driving back to safety after the bus took a five mile diversion on a narrow country road.

The 57 bus to Kingston went off track after missing a turn that landed them on an hour-long journey to the countryside of Esher.

“It felt very strange and alien-like to stand at the very front of a TFL bus helping direct the driver,” said the student, Joe Benham.

The driver faced abuse from passengers while trying to navigate the double decker through unknown terrain of small roads, height restrictions, and low hanging trees.

The 23-year-old student realised that the situation could become dangerous.

“I heard shouting and arguing over the sound of my headphones, and when we left the safety of the busy road onto a country lane that I knew it was getting dangerous, as the shouting was getting worse,” he said. “I thought if someone didn’t do something, then the bus would crash into something or someone quite easily.”

The student felt obliged to step in and direct the passengers to halt the abuse. Benham tried to take control of the situation by asking the passengers to calm down and leave the driver to concentrate on his task.

“I knew I needed to take action to control these passengers and allow the driver to drive in a safe environment.

I told them to move to the back of the bus and talk quietly. But they argued back and directed their abuse at me.”

The bus driver had to manage 15 to 20 passengers that complained and distracted him from his task.

“Some passengers were constantly harassing him by saying things such as ‘you don’t know what you’re doing, I could drive better than this’,” he said.

“When there was shouting it felt out of control and I could sense the stress coming from the driver as he was saying nothing and trying to concentrate on steering the bus, avoiding low hanging trees and narrow sections of the road.”

The international relations and politics student works part-time driving a delivery van, and was not unfamiliar with the task of driving a height-restricted vehicle.

The driver and the student calculated that both of the routes to Hampton Court Palace had dangerous height restrictions, and thus decided that the safest way back was to go all the way back to where they started.

“It doesn’t happen often, and it took me by surprise for one of these situations to take place on the bus I take to university everyday.”