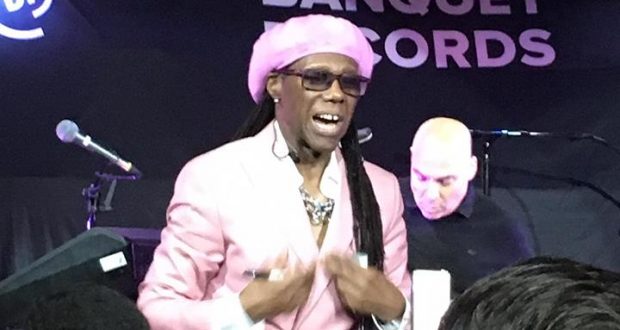 Nile Rodgers talking to his diverse audience at Pryzm

Written by Robyn White on October 1 2018

A crowd of all ages and backgrounds gathered at PRYZM in Kingston on Saturday night to ‘Freak out’ with Nile Rodgers and his disco funk band, Chic.

An evening spent at Pryzm often fails to satisfy but Banquet Records latest gig certainly made the sticky floored nightclub seem like a short but sweet escape from Kingston’s usual clubbing scene. Tickets to the show sold out within hours,  resulting in Banquet Records adding a 5pm show before the original at 7pm. This, along with the tickets only being £12 each (when you’d usually be lucky to get tickets for £70) gave this award winning band an accessibility that so many famous artists lack.

Chic have released a new album after a 26 year hiatus, but that hasn’t  put people off their music. The show, which didn’t include many new songs, was mainly an event for nostalgics to listen to old and much loved classics live.

Nile Rodgers, looking dapper in a pink hat and blazer, beamed at the audience when he walked out onto the stage. “Wow. I’d say I’m speechless but my job is to say something,” he gushed. “You guys are fantastic.” (His smile was as bright as lead singer Kimberly Davies’ pink sequins.) After two lots of cancer, Rodgers is still committed to looking to the future with positivity and making listeners happy with Chics’ feel good sound. He proclaimsed to the audience that his fight with cancer is now over, sparking a huge roar of screams and support.

Opening with 90s hit ‘We are Family’, the crowd screamed every word, and felt like more then sweaty strangers to one another, rather, it created an intimate atmosphere which seemed somewhat surprising for a small and stuffy venue. Every song was played with fantastic energy, making it unsurprising that the band has now won a total of three Grammys, the lat one being in 2013.

Chic, first forming in the 1970s, isn’t the obvious choice of music for a student to jig to on a Saturday evening. Their music is admittedly cheesy, yet instantly recognisable and substantially more satisfying than the same-four-note pop commonly found on todays’ charts. Rodgers proves this, telling the crowd that Chic has now reached three generations of listeners. Any member of the crowd could look to the left to see a middle aged mum, and to their right to see a university fresher, suggesting that these disco bangers are timeless.

Perhaps the bands biggest hit,‘Le Freak’, certainly prompted the crowd’s biggest screams, and the most drinks to be spilled on the floor. At the bar, a girl who seemed to be in her twenties screamed: “How f**king great are they?!”.

At the end of the show, Rodgers took out his earpieces so he could hear the crowd scream, a sweet gesture which showed with no doubt that this 66-year-old still loves what he does, and will not be stopping anytime soon.