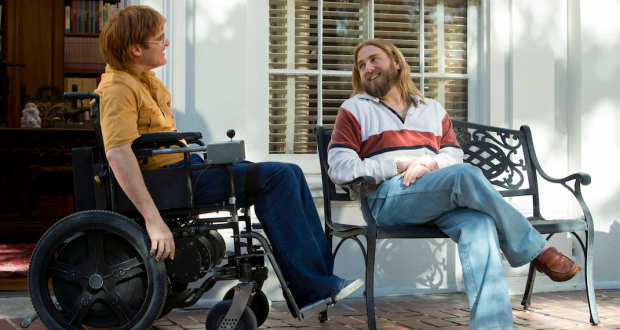 Don’t Worry, He Won’t Get Far On Foot: are you ready for some dark humour?

Written by Eleanor Ideson on October 15 2018

‘Don’t Worry, He Won’t Get Far on Foot’ is a film in which you won’t know whether to laugh or cry – and this mostly depends on your humour.

In true Gus Van Sant (Good Will Hunting) style, we follow the journey of troubled cartoonist John Callahan, played phenomenally by Joaquin Phoenix, from living the life of a party-centric alcoholic, to being forced onto the road to recovery, after a life changing accident that leaves him quadriplegic.

After the accident, which involves fellow drinker Dexter (Jack Black), John attends an AA meeting. It’s here he gets sponsored by Donnie, played by Jonah Hill, a rich, gay hippie, who sports long Jesus-like hair, a tunic and lavish jewellery.

Through the film, John carries out the 12 steps to battle his demons against alcoholism, his disability and his personal life, all while drawing politically incorrect but comic cartoons with the support of his on-screen girlfriend, played by Phoenix’s real-life beau, Rooney Mara.

From drawing a man bent over the doctors table saying: “You’re not going to believe this Mr Smith…but they’ve opened a new Starbucks up your ass,” to the KKK dressed in their bed sheets saying: “Don’t you love it when they’re still warm from the dryer?” John’s cartoons are littered with amusing but dark humour.

Based on the true story of John Callahan, the seventies vibe is unapologetic, from John’s costume-like flares and shaggy ginger mop to Donnie dancing in his underwear to the iconic ‘Shake Your Groove Thing’ by Peaches and Herb.

But the film’s sporadic style in flicking between past and present slows the film down to a pace that if tightened could have had more of an emotional impact for the audience.

It is also hard to distinguish the tone of the film, as although it is obviously comic in moments, such as Donnie calling the group of AAs he sponsors his ‘piglets’, it also has moments where you feel bad for laughing and does not shy away from real-life problems of being quadriplegic, from toilet issues to sexual ones.

But, with undeniably fantastic performances by the whole cast, including Jack Black and John’s fellow AA participant, Beth Ditto, this comedic drama is worth a watch.